Peter Matthew Siddle is an Australian cricketer. He is a specialist right-arm fast-medium bowler who currently plays for Tasmania in first-class and List A cricket and for the Adelaide Strikers in the Big Bash League. He has played Test cricket for Australia over an eight-year period from 2008 to 2016, before being recalled for the Test series against Pakistan in 2018. Peter Siddle retired from International cricket in December 2019.

Right-arm fast bowler who became Australia's 15th player to reach 200 Test wickets. He's most known for a hat-trick he scored on his 26th birthday in 2010.

He married Anna Weatherlake in 2017.

At the age of 14, he joined the Latrobe Cricket Club and began playing club cricket. In 2009, he was named ICC Emerging Player of the Year.

He took the wickets of Alastair Cook , Matt Prior, and Stuart Broad to complete his birthday hat-trick. It was also the first Ashes hat-trick by an Australian since Shane Warne in the 1994-1995 Ashes.

Peter Siddle's house and car and luxury brand in 2021 is being updated as soon as possible by in4fp.com, You can also click edit to let us know about this information. 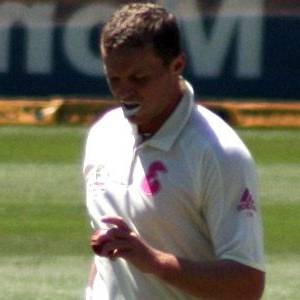