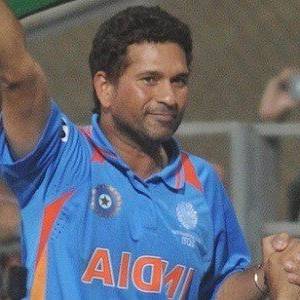 Sachin Ramesh Tendulkar AO BR ( ; pronounced [sət͡ʃin t̪eːɳɖulkəɾ]; born 24 April 1973) is an Indian former international cricketer who captained the Indian national team. He is regarded as one of the greatest batsmen in the history of cricket.Tendulkar took up cricket at the age of eleven, made his Test match debut on 15 November 1989 against Pakistan in Karachi at the age of sixteen, and went on to represent Mumbai domestically and India internationally for close to twenty-four years. In 2002, halfway through his career, Wisden ranked him the second-greatest Test batsman of all time, behind Don Bradman, and the second-greatest ODI batsman of all time, behind Viv Richards. Later in his career, Tendulkar was part of the Indian team that won the 2011 Cricket World Cup, his first win in six World Cup appearances for India. He had previously been named "Player of the Tournament" at the 2003 edition of the tournament.

When Indian cricketer Sachin Tendulkar made his test debut against Pakistan as a 16 year old, little did the world know that the curly-haired teenager would one day become one of the greatest legends of the game. In his homeland, India, Sachin is more than just a popular sportsperson; he is an institution in himself. He is not just loved and respected, but revered. Called the God of Cricket by his fans, Sachin has ruled the game for well over two decades”a very rare feat for a sportsperson. Widely considered to be the greatest cricketer ever, he is the only player to have scored one hundred international centuries. Born into a middle class home in Bombay, he started playing cricket while still a little boy and made his international test debut at the tender age of 16! And thus began the journey of a cricketer who would smash several long standing records and create unbelievable new ones. Keeping in view his awesome performance, he was made the captain of the Indian team. Captaincy however did not suit him and he resigned. In spite of his iconic status, Sachin is known to be a simple and principled man which further adds to his popularity.

He married Anjali Tendulkar in 1995. They have a son named Arjun and a daughter named Sara.

He was a bully during his young years and was introduced to cricket at age 11. He debuted with India's Test side only five years later.

He earned many honors in his career, including Wisden Leading Cricketer in the World in 2010 and the Wisden Cricketer of the Year in 1997.

In 2002, he was ranked the second-best cricketer in the world by Wisden, or the Bible of Cricket. The number-one ranking went to the legendary Don Bradman.

Sachin Tendulkar's house and car and luxury brand in 2021 is being updated as soon as possible by in4fp.com, You can also click edit to let us know about this information.