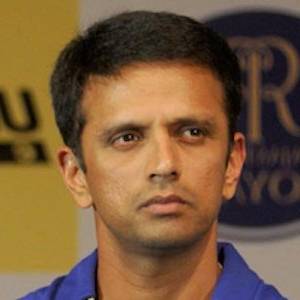 Rahul Sharad Dravid ( (listen); born 11 January 1973) is a former Indian cricketer and captain of the Indian national team, currently serving as its head coach. Prior to his appointment to the senior men's national team, Dravid was the Head of Cricket at the National Cricket Academy (NCA), and the head coach of the India Under-19 and India A teams. Under his tutelage, the under-19 team finished runners up at the 2016 U-19 Cricket World Cup and won the 2018 U-19 Cricket World Cup. Known for his sound batting technique, Dravid scored 24,177 runs in international cricket and is widely regarded as one of the greatest batsmen in the history of cricket. He is colloquially known as Mr. Dependable and often referred to as The Wall.Born in a Marathi family and raised in Bangalore, he started playing cricket at the age of 12 and later represented Karnataka at the under-15, under-17 and under-19 levels. Dravid was named one of the best five cricketers of the year by Wisden Cricketers' Almanack in 2000 and received the Player of the Year and the Test Player of the Year awards at the inaugural ICC awards ceremony in 2004. In December 2011, he became the first non-Australian cricketer to deliver the Bradman Oration in Canberra.As of January 2022, Dravid is the fourth-highest run scorer in Test cricket, after Sachin Tendulkar, Ricky Ponting and Jacques Kallis. In 2004, after completing his century against Bangladesh in Chittagong, he became the first player to score a century in all the ten Test-playing countries. As of October 2012, he holds the record for the most catches taken by a player (non-wicket-keeper) in Test cricket, with 210. Dravid holds a unique record of never getting out for a Golden duck in the 286 Test innings which he has played. He has faced 31258 balls, which is the highest number of balls faced by any player in test cricket. He has also spent 44152 minutes at the crease, which is the highest time spent on crease by any player in test cricket. Dravid and Sachin Tendulkar are currently the highest scoring partnership in Test cricket history having scored 6920 runs combined when batting together for India.In August 2011, after receiving a surprise recall in the ODI series against England, Dravid declared his retirement from ODIs as well as Twenty20 International (T20I), and in March 2012, he announced his retirement from international and first-class cricket. He appeared in the 2012 Indian Premier League as captain of the Rajasthan Royals.Rahul Dravid,

He has two children, Samit and Anvay, with wife Vijeta Pendharkar.

He played his first professional domestic cricket game with Karnataka in 1990. He made his Test and ODI debuts in 1996.

He held the record for most Test cricket catches by a non-wicket keeper, with 210, at the time of his retirement.

With 13,288 Test runs, he retired second only to Sachin Tendulkar. He was later passed by Ricky Ponting and Jacques Kallis, the later of whom retired with 13,289 runs.

Rahul Dravid's house and car and luxury brand in 2021 is being updated as soon as possible by in4fp.com, You can also click edit to let us know about this information.