Mariano Rivera is a Panamanian-American former professional baseball pitcher who played 19 seasons in Major League Baseball for the New York Yankees, from 1995 to 2013. Nicknamed "Mo" and "Sandman", he spent most of his career as a relief pitcher and served as the Yankees' closer for 17 seasons. A thirteen-time All-Star and five-time World Series champion, he is MLB's career leader in saves and games finished . Rivera won five American League Rolaids Relief Man Awards and three Delivery Man of the Year Awards, and he finished in the top three in voting for the AL Cy Young Award four times. He was inducted into the Baseball Hall of Fame as part of its class of 2019 in his first year of eligibility, and was the first player ever to be elected unanimously by the Baseball Writers' Association of America .Raised in the modest Panamanian fishing village of Puerto Caimito, Rivera was an amateur player until he was signed by the Yankees organization in 1990. He debuted in the major leagues in 1995 as a starting pitcher, before permanently converting to a relief pitcher late in his rookie year. After a breakthrough season in 1996 as a setup man, he became the Yankees' closer in 1997. In the following seasons, he established himself as one of baseball's top relievers, leading the major leagues in saves in 1999, 2001, and 2004. Rivera primarily threw a sharp-moving, mid-90s mile-per-hour cut fastball that frequently broke hitters' bats and earned a reputation as one of the league's toughest pitches to hit. With his presence at the end of games, signaled by his foreboding entrance song "Enter Sandman", Rivera was a key contributor to the Yankees' success in the late 1990s and early 2000s. An accomplished postseason performer, he was named the 1999 World Series Most Valuable Player and the 2003 AL Championship Series MVP, and he holds several postseason records, including lowest earned run average and most saves .

Relief pitcher for the New York Yankees who was a 13-time MLB All-Star and the 2000 World Series MVP. With 652 career saves, he holds the MLB record for most saves by a closer. He is widely recognized as the best closer of all time.

He had three sons, Mariano Jr, Jafet, and Jaziel, with his wife Clara.

While growing up in Panama, he played baseball using milk cartons and tree branches.

He was signed as a starting pitcher by the Yankees, but the team found that he was much better suited coming out of the bullpen.

Mariano Rivera's estimated Net Worth, Salary, Income, Cars, Lifestyles & many more details have been updated below. Let's check, How Rich is He in 2021-2022? According to Forbes, Wikipedia, IMDB, and other reputable online sources, Mariano Rivera has an estimated net worth of $80 Million at the age of 52 years old in year 2022. He has earned most of his wealth from his thriving career as a Baseball player from Panama. It is possible that He makes money from other undiscovered sources

He won 5 World Series Championship alongside shortstop Derek Jeter on the Yankees.

Mariano Rivera's house and car and luxury brand in 2021 is being updated as soon as possible by in4fp.com, You can also click edit to let us know about this information. 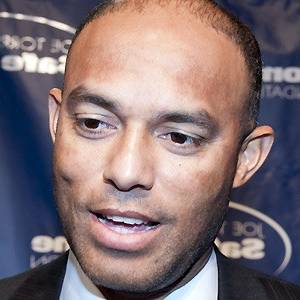