Jack Roosevelt Robinson was an American professional baseball player who became the first African American to play in Major League Baseball in the modern era. Robinson broke the baseball color line when he started at first base for the Brooklyn Dodgers on April 15, 1947. When the Dodgers signed Robinson, it heralded the end of racial segregation in professional baseball that had relegated black players to the Negro leagues since the 1880s. Robinson was inducted into the Baseball Hall of Fame in 1962.During his 10-year MLB career, Robinson won the inaugural Rookie of the Year Award in 1947, was an All-Star for six consecutive seasons from 1949 through 1954, and won the National League Most Valuable Player Award in 1949—the first black player so honored. Robinson played in six World Series and contributed to the Dodgers' 1955 World Series championship.

Jackie Robinson, the first African-American to play Major League Baseball, is one of the twentieth century's most inspiring and towering characters. Despite the racial segregation that existed at the time, Robinson demonstrated to the world that the essence of a game has nothing to do with race or color. He not only led by example, but he also aided the entry of a generation of young African-American players into the Major League Baseball. Baseball was more than a game to him; it was a platform for him to communicate his opinions on racism and demonstrate that he was just like the rest of the team. His transformation from a marginalized baseball player to one of the game's most well-known players, on the other hand, was rather bold. He suffered numerous threats while playing for the Dodgers, and he was even booed by the fans. Robinson's family was not spared, but all he could think about was playing his game no matter what. That's exactly what he did! He went on to become one of the greatest players in American baseball history, despite facing racial persecution. He received numerous honors and various institutions were named after him as a result of his many accomplishments and records.

He was married to Rachel Robinson from 1946 until his death. He had three children: Sharon, David and Jackie Jr.

In Cairo, Georgia, he joined a gang to protest the exclusion of blacks, but his friend Carl Anderson persuaded him to focus his efforts elsewhere. He was enlisted into a cavalry battalion in Fort Riley, Kansas, where he was approved into the race-neutral Officer Candidate School.

In 1997, his #42 jersey was retired by all major league teams. His legacy was further honored with the introduction of Jackie Robinson Day, where every player across the league wears #42.

He was a key player for the Dodgers during the 1955 World Series, defeating Mickey Mantle and the New York Yankees in seven games. 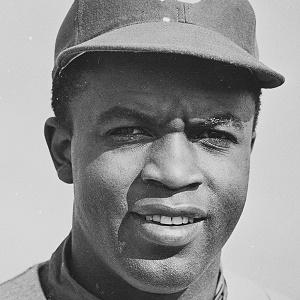