All-Star pitcher nicknamed as "Doc" who won the Cy Young Award twice, one in each league, and recorded a no-hitter in the playoffs for the Philadelphia Phillies in 2010. He finished his career with 203 victories and a 3.38 ERA.

He married Brandy Gates on November 27, 1998 and they had two children together.

In only his second MLB start, he gave up a no-hitter in the ninth inning.

Four months prior to throwing his no-hitter in the playoffs, he threw a perfect game, making him the fifth player ever to record multiple no-hitters in one season.

Information about His net worth in 2021 is being updated as soon as possible by infofamouspeople.com, You can also click edit to tell us what the Net Worth of the Roy Halladay is

He became the second player to throw a no-hitter in a playoff game, more than 50 years after Don Larsen threw the first. 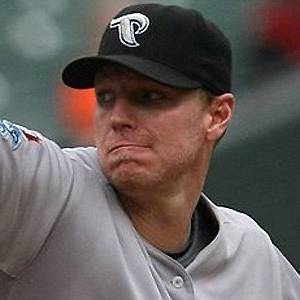