Aaron James Judge is an American professional baseball right fielder for the New York Yankees of Major League Baseball . Judge was unanimously selected as the American League Rookie of the Year in 2017 and finished second in voting for the AL Most Valuable Player Award.Judge, who played college baseball for the Fresno State Bulldogs, was selected by the Yankees with the 32nd pick in the first round of the 2013 MLB draft. After making his MLB debut in 2016 and hitting a home run in his first MLB career at bat, Judge went on to have a record-breaking rookie season in 2017. He was named an All-Star and won the Home Run Derby, becoming the first MLB rookie to do so. Judge ended the season with 52 home runs, breaking Mark McGwire's MLB rookie record of 49 and the Yankees' full-season rookie record of 29 . His rookie record would stand for two more years when Pete Alonso broke it in 2019 with 53 home runs. He won the American League Rookie of the Month Awards for April, May, June, and September, as well as the AL's Player of the Month Award for June and September, and then again for May of 2022.

Aaron James Judge is a professional baseball outfielder in the United States. He is now a member of the Major League Baseball's New York Yankees. He is physically one of the biggest players in the professional leagues, standing at six feet and seven inches. He was born and reared in Linden, California, where he attended Linden High School and excelled in athletics. He was also a part of the Linden High School squad that advanced to the California Interscholastic Federation Division III playoffs. He was drafted in the 31st round of the Major League Baseball draft in 2010, but instead decided to attend California State University and play baseball for the Fresno State Bulldogs. The New York Yankees, who had been following his progress for the previous three years, ultimately selected him in the first round of the 2013 Major League Baseball draft. He proved to be a significant addition to the squad throughout the following several years. The 'Silver Slugger Award' and the 'Players Choice Award' are among the honors he has won.

He and his older brother John were both adopted by parents Patty and Wayne Judge. Both his parents were teachers.

He was a three-sport athlete at Linden High School, earning All-American honors in baseball as a senior. He was selected in the 31st round by the Oakland Athletics in 2010, but he decided to attend California State University, Fresno instead.

Aaron Judge's estimated Net Worth, Salary, Income, Cars, Lifestyles & many more details have been updated below. Let's check, How Rich is He in 2021-2022? According to Forbes, Wikipedia, IMDB, and other reputable online sources, Aaron Judge has an estimated net worth of $10 Million at the age of 30 years old in year 2022. He has earned most of his wealth from his thriving career as a baseball player from United States. It is possible that He makes money from other undiscovered sources Reliable sources show that his annual salary is about 622,300 USD (2018)

He passed Babe Ruth to set the Yankees single-season franchise home record with his 52nd home run in 2017.

Aaron Judge's house and car and luxury brand in 2021 is being updated as soon as possible by in4fp.com, You can also click edit to let us know about this information. 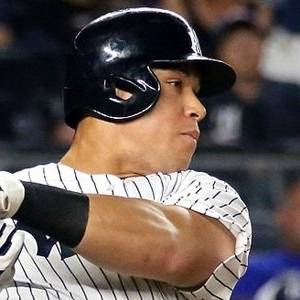