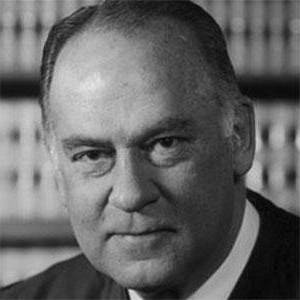 Potter Stewart was an American lawyer and judge who served as an Associate Justice of the United States Supreme Court from 1958 to 1981. During his tenure, he made major contributions to, among other areas, criminal justice reform, civil rights, access to the courts, and Fourth Amendment jurisprudence.After graduating from Yale Law School in 1941, Stewart served in World War II as a member of the United States Navy Reserve. After the war, he practiced law and served on the Cincinnati city council. In 1954, President Dwight D. Eisenhower appointed Stewart to a judgeship on the U.S. Court of Appeals for the Sixth Circuit. In 1958, Eisenhower nominated Stewart to succeed retiring Associate Justice Harold Hitz Burton, and Stewart won Senate confirmation afterwards. He was frequently in the minority during the Warren Court but emerged as a centrist swing vote on the Burger Court. Stewart retired in 1981 and was succeeded by the first female United States Supreme Court justice, Sandra Day O'Connor.

Potter Stewart is most known for his contributions to criminal justice reform and Fourth Amendment jurisprudence. He was the driving force behind several groundbreaking legal reforms in the United States. His father was a well-known lawyer and politician, so it was only logical that his son took the same path. He graduated from Yale Law School, where he served as the editor of the Yale Law Journal. After serving in the Navy during World War II, he went into private practice. In 1959, President Dwight Eisenhower appointed him to the United States Court of Appeals for the Sixth Circuit to replace a departing Supreme Court justice. He proved to be an astute and practical lawyer with a pragmatic bent of mind. Stewart was a popular lawyer who had influenced several significant court opinions, and he was considered the frontrunner to become Chief Justice under Nixon's administration; however, Stewart had no such ambitions. He was well remembered for saying, "I know it when I see it" in reference to his obscenity decision in a specific case. His comment on capital punishment is also well-known: These death sentences are cruel and unusual in the same way that being struck by lightning is.

He grew up in Jackson, Michigan, a small town south of Lansing. His father, James Garfield Stewart, worked as a justice of the Ohio Supreme Court.

After serving in the Naval Reserve during WWII, he worked in a private law business for a while before being appointed to the United States Court of Appeals for the Sixth Circuit at the age of 39.

He contributed to jurisprudence of the Fourth Amendment.

He was a member of Phi Delta Phi along with future president Gerald R. Ford at Yale Law School in the late 1930s.