Joan Ruth Bader Ginsburg was an American lawyer and jurist who served as an associate justice of the Supreme Court of the United States from 1993 until her death in 2020. She was nominated by President Bill Clinton to replace retiring justice Byron White, and at the time was generally viewed as a moderate consensus-builder. She eventually became part of the liberal wing of the Court as the Court shifted to the right over time. Ginsburg was the first Jewish woman and the second woman to serve on the Court, after Sandra Day O'Connor. During her tenure, Ginsburg wrote notable majority opinions, including United States v. Virginia , Olmstead v. L.C. , Friends of the Earth, Inc. v. Laidlaw Environmental Services, Inc. , and City of Sherrill v. Oneida Indian Nation of New York .

Ruth Bader Ginsburg is a United States Supreme Court Justice. President Jimmy Carter Jr. nominated Ginsburg to the United States Court of Appeals in 1980, and President Bill Clinton appointed her to the Supreme Court on August 10, 1993. Ruth Bader Ginsburg became the Supreme Court's second female justice, and after 25 years of absolute leadership, she is now a darling of both the old and the young. Ginsburg has not only had a star-studded career, but she has also inspired countless of people with the way she conducts herself on and off the court. Her ability to inspire young minds stems from her determination to beat two forms of cancer and keep in shape so she may do what she loves. Continue reading to learn more about this Court's amazing lady.

She had an older sister who passed away as a child. She has two children with husband Martin D. Ginsburg, a noted tax expert.

After graduating from Columbia Law School, she worked with the ACLU to improve the status of women.

She continued her work for women's equality on the Supreme Court where she ruled that the Virginia Military Institute, a state-funded school, could not refuse entry to women.

She ended her dissenting opinion in the 2000 case deciding whether George W. Bush or Al Gore won the election with "I dissent," pointedly leaving out the traditional "respectfully." 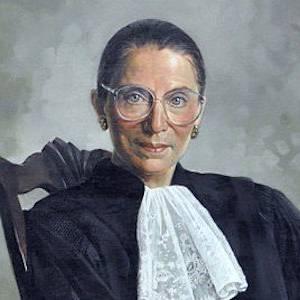