Born on November 6, 1955 (age 66) in Chicago, Illinois, United States. She is a celebrity Journalist, Author, Television producer, Voice Actor, Screenwriter, Newscaster. Her popular books are I've Been Thinking ...: Reflectio... (2018), What's Heaven (1999), Just Who Will You Be? (2008), Ten Things I Wish I'd Known B... (2000) and And One More Thing Before Yo... (2005). The parents of Maria Shriver are Eunice Kennedy Shriver, Sargent Shriver. She had 4 children Katherine Schwarzenegger, Patrick Schwarzenegger, Christopher Schwarzenegger, Christina Schwarzenegger. Her spouse is Arnold Schwarzenegger (m. 1986). She height is 5 ft 5.5 in. She weight is 59 kg. You can find Her website below: http://mariashriver.com/.

Maria Shriver is a well-known American journalist and activist who has worked for NBC for many years. She also served as the First Lady of California for seven years while married to Arnold Schwarzenegger, a well-known actor, businessman, and former Governor of California. Shriver was born in Chicago, Illinois, to American diplomat Sargent Shriver and is the niece of former US President John F. Kennedy. After graduating from Georgetown University in Washington, she began her career as a journalist. She wrote a book called 'Ten Things I Wish I'd Knew Before I Went Out Into The Real World' during her job as a journalist. She was also a co-anchor for NBC's Emmy-winning coverage of the 1988 Summer Olympics. When her husband, Arnold Schwarzenegger, was elected Governor of California, she resigned. Shriver also co-produced and hosted a television show called 'The Alzheimer's Project.' It earned her two Emmy nominations. After her divorce from Arnold Schwarzenegger, she returned to NBC. She is currently employed by NBC as a special anchor and correspondent.

A member of the Kennedy clan, she is the daughter of Eunice Kennedy Shriver and the niece of former president John F. Kennedy . She has four children, Katherine , Christina, Patrick , and Christopher , with Arnold Schwarzenegger .

She attended the Stone Ridge School of the Sacred Heart in Bethesda, Maryland, for high school. She went on to Manhattanville College and Georgetown University, where she earned her BA in American Studies.

She published her popular book, Ten Things I Wish I'd Known Before I Went Out Into The Real World, in 2000.

Information about Her net worth in 2021 is being updated as soon as possible by infofamouspeople.com, You can also click edit to tell us what the Net Worth of the Maria Shriver is

In 2007, she filled in as a substitute host on the CNN show Larry King Live.

Maria Shriver's house and car and luxury brand in 2021 is being updated as soon as possible by in4fp.com, You can also click edit to let us know about this information. 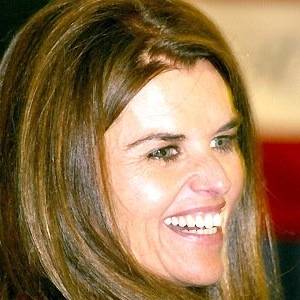