Arnold Alois Schwarzenegger (; pronounced [ˈaʁnɔlt ˈaːlɔɪ̯s ˈʃvaʁt͡səneːɡɐ] ; born July 30, 1947) is an Austrian-American actor, film producer, businessman, former bodybuilder and politician who served as the 38th governor of California between 2003 and 2011. As of 2022, he is the most recent Republican governor of California. Time magazine named Schwarzenegger one of the 100 most influential people in the world in 2004 and 2007.Schwarzenegger began lifting weights at the age of 15 and went on to win the Mr. Universe title at age 20 and subsequently won the Mr. Olympia title seven times. He is widely regarded as either the greatest or one of the two greatest bodybuilders of all time along-with Ronnie Coleman, and has written many books and articles about bodybuilding. The Arnold Sports Festival, considered the second-most important bodybuilding event after Mr. Olympia, is named after him. He appeared in the bodybuilding documentary Pumping Iron . Schwarzenegger retired from bodybuilding and gained worldwide fame as a Hollywood action star, with his breakthrough the sword and sorcery epic Conan the Barbarian , a box-office hit with a sequel in 1984. After playing the title character in the science fiction film The Terminator , he starred in the sequels Terminator 2: Judgment Day , Terminator 3: Rise of the Machines , Terminator Genisys , and Terminator: Dark Fate . His other successful action films included Commando , The Running Man , Predator , Red Heat , Total Recall , and True Lies , in addition to comedy films such as Twins , Kindergarten Cop , Junior , and Jingle All the Way . He is the founder of the film production company Oak Productions.As a Republican candidate, Schwarzenegger was first elected on October 7, 2003, in a special recall election to replace then-Governor Gray Davis. He received 48.6% of the vote, 17 points ahead of Democrat runner-up Cruz Bustamante. He was sworn in on November 17 to serve the remainder of Davis' term, and was re-elected in the 2006 California gubernatorial election with an increased vote share of 55.9% to serve a full term as governor. In 2011, he reached his term limit as Governor and returned to acting.

Arnold Schwarzenegger is a notable social and political figure who went on to become a famous international personality despite hailing from an impoverished background. His father, who was a police chief, did not approve of him being an athlete and rather supported his brother than him. However, the young lad did not get discouraged and engaged in sports like soccer which helped him in gaining physical strength. He eventually, developed interest in body-building and chased his dream of becoming the best body-builder in the world. He realized this dream when he won the Mr. Olympia title. He also dreamt of becoming an actor and this dream too was fulfilled as he went on to secure an exclusive place in the industry for himself. He was politically active and even got elected as the Governor of California. This actor also has a philanthropic side and has helped many charitable organizations in their cause. He is believed to have donated his salary, as the Governor, to charitable foundations. This personality is also a supporter of the ˜Special Olympics'. Schwarzenegger has managed to strike a balance between three different callings namely body-building, acting and politics. To know more about his life and works read on

He married television journalist, Maria Shriver in April 1986. The couple had a high-profile split in May 2011. He has three sons named Patrick, Christopher and Joseph and two daughters named Katherine and Christina.

He decided to pursue a career as a bodybuilder at age fourteen, despite demonstrating prowess in football. He became the youngest person to win the Mr. Universe contest when he was 20.

Arnold Schwarzenegger's estimated Net Worth, Salary, Income, Cars, Lifestyles & many more details have been updated below. Let's check, How Rich is He in 2021-2022? According to Forbes, Wikipedia, IMDB, and other reputable online sources, Arnold Schwarzenegger has an estimated net worth of $450 Million at the age of 75 years old in year 2022. He has earned most of his wealth from his thriving career as a Actor, Bodybuilder, Politician, Entrepreneur, Businessperson, Investor, Film Producer, Television Director, Writer from Austria. It is possible that He makes money from other undiscovered sources

He starred alongside Danny DeVito in the comedy film Twins.

Arnold Schwarzenegger's house and car and luxury brand in 2021 is being updated as soon as possible by in4fp.com, You can also click edit to let us know about this information. 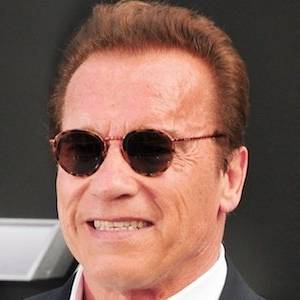