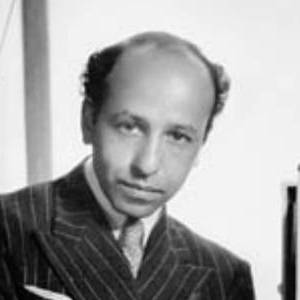 Yousuf Karsh was a Canadian-Armenian photographer known for his portraits of notable individuals. He has been described as one of the greatest portrait photographers of the 20th century.An Armenian genocide survivor, Karsh migrated to Canada as a refugee. By the 1930s he established himself as a significant photographer in Ottawa, where he lived most of his adult life, though he traveled extensively for work. His iconic 1941 photograph of Winston Churchill was a breakthrough point in his 60-year career, through which he took numerous photos of known political leaders, men and women of arts and sciences. Over 20 photos by Karsh appeared on the cover of Life magazine, until he retired in 1993.

Photographer well-known for his historical portraits of numerous famous people. He relocated to Quebec with his maternal uncle after fleeing World War I. He learned to speak English and French well and is a native Arabic speaker. The man who would teach him the craft and business of photography was his uncle. In Ottawa, he first set up shop in 1932. Notably, he only captured images of those who were well-known or influential members of society. Over the years, he provided humorous explanations for his actions, such as that he did it to ensure his own immortality and that the world's most astounding cross-section of people were the few who genuinely made the world go round as opposed to the common majority of inhabitants. As a result of his success, the Los Angeles Times listed him as one of the best portrait photographers of the 20th century at the time of his dying.

His family had an interesting backstory for the time. His father was an illiterate, traveling merchant. His mother, however, was a very well educated scholar and reader, something of a novelty back then. He had two brothers, the younger of the two was also a photographer. He was married twice. First to Solange Gauthier in 1939, whom he divorced in 1961. Next to Estrellita Nachbar ?in 1962 whom he was still with upon his death. He never fathered any children.

He was born during the Ottoman Empire's colonization of Armenia, which resulted in the genocide of Armenians during their rule during the First World War. Despite the fact that the majority of his family members were killed in the fighting, he managed to flee a Syrian refugee camp in 1922 after surviving this internal terrorism. His remaining family members sent him on a month-long journey in a caravan that would take him from Beirut to Nova Scotia, Canada.

He held both Canadian and Armenian citizenship. He identified as an Armenian for his entire life, but he was also a proud citizen of Canada.

Over 20 years of the history of Life magazine's publication historyThroughout his career, before he retired in 1993, over 20 of his portraits were the featured cover art for the prominent publication Life magazine. His cover subjects included Ernest Hemingway, John F. Kennedy, Winston Churchill, and Martin Luther King Jr.