Heywood "Woody" Allen is an American film director, writer, actor, and comedian whose career spans more than six decades and multiple Academy Award-winning films. He began his career writing material for television in the 1950s, mainly Your Show of Shows working alongside Mel Brooks, Carl Reiner, Larry Gelbart, and Neil Simon. He also published several books featuring short stories and wrote humor pieces for The New Yorker. In the early 1960s, he performed as a stand-up comedian in Greenwich Village alongside Lenny Bruce, Elaine May, Mike Nichols, and Joan Rivers. There he developed a monologue style and the persona of an insecure, intellectual, fretful nebbish. He released three comedy albums during the mid to late 1960s, earning a Grammy Award for Best Comedy Album nomination for his 1964 comedy album entitled simply, Woody Allen. In 2004, Comedy Central ranked Allen fourth on a list of the 100 greatest stand-up comedians, while a UK survey ranked Allen the third-greatest comedian.By the mid-1960s, Allen was writing and directing films, first specializing in slapstick comedies such as Take the Money and Run , Bananas , Sleeper , and Love and Death , before moving into dramatic material influenced by European art cinema during the late 1970s with Interiors , Manhattan , and Stardust Memories , and alternating between comedies and dramas to the present. Allen is often identified as part of the New Hollywood wave of filmmakers of the mid-1960s to late 1970s such as Martin Scorsese, Robert Altman, and Sidney Lumet. He often stars in his films, typically in the persona he developed as a standup. His film Annie Hall , a romantic comedy featuring Allen and his frequent collaborator Diane Keaton, won four Academy Awards, including Best Picture, Best Director, Best Original Screenplay, and Best Actress for Keaton. Critics have called his work from the 1980s his most developed period. Those films include Zelig , Broadway Danny Rose , The Purple Rose of Cairo , Hannah and Her Sisters , Radio Days , Another Woman , and Crimes and Misdemeanors . In the 21st century, many of Allen's films have been set and shot in Europe, including Match Point , Vicky Cristina Barcelona , Midnight in Paris , and To Rome with Love . Allen returned to America gaining acclaim for Blue Jasmine and Cafe Society .

Having a penchant for humor and wit, Woody Allen still stands strong for his age in the entertainment industry and is respected by the world for his ability to express his feelings and emotions using slapstick humor. Magnificently endowed in the field of creativity, Allen has made a mark not only as a comedian but as an actor, director, playwright and jazz musician. In his five decade long career, Allen has given the world numerous movies and theatrical works which are going to be influential and inspirational for the sheer sense of novelty and ingenuity that they carry. His long list of work has touched the various genres of humor, right from slapstick to satirical and even dark comedy. Interestingly, the actual personality of Allen is arch different from what he puts up on stage, as a neurotic, nervous and intellectual person. He carries the same persona for the big screen as well. For most of his movies, Allen has drawn inspiration from literature, philosophy, psychology, Judaism, European cinema and New York City. It is due to his sheer aptitude in filmmaking that he has been known the world over as one of the most prolific and gifted filmmakers of the modern era.

He had a difficult relationship with his parents, especially his mother. He began a relationship with actress Mia Farrow around 1980, and it ended in 1992 when he began seeing Farrow's adopted daughter Soon-Yi.

He performed card and magic tricks in his youth and underwent the legal process of changing his name to Heywood Allen when he was 17.

He often played up his neurotic personality for laughs in his films, but was also open about his extensive stint in psychoanalysis.

Woody Allen's estimated Net Worth, Salary, Income, Cars, Lifestyles & many more details have been updated below. Let's check, How Rich is He in 2021-2022? According to Forbes, Wikipedia, IMDB, and other reputable online sources, Woody Allen has an estimated net worth of $140 Million at the age of 86 years old in year 2022. He has earned most of his wealth from his thriving career as a Actor, Comedian, Film director, Playwright, Musician, Screenwriter, Writer, Voice Actor, Film Score Composer, Film Producer from United States. It is possible that He makes money from other undiscovered sources

In the early 1970s, he was in a relationship with actress Diane Keaton, who stars as the title character in the 1977 romantic comedy Annie Hall. He wrote the character Annie Hall specifically for Keaton after their break-up.

Woody Allen's house and car and luxury brand in 2021 is being updated as soon as possible by in4fp.com, You can also click edit to let us know about this information. 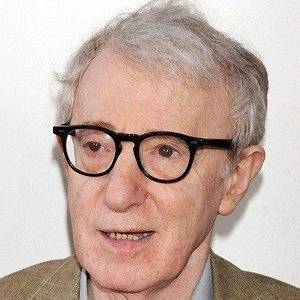