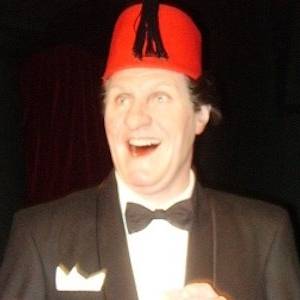 Thomas Frederick Cooper was a Welsh-born prop comedian and magician of Anglo-Welsh parentage. As an entertainer, his appearance was large and lumbering at 6 feet 3 inches , and he habitually wore a red fez when performing. He initially served in the British Army for seven years, before eventually developing his conjuring skills and becoming a member of The Magic Circle. Although he spent time on tour performing his magical act, which specialised on magic tricks that appeared to "fail", he rose to international prominence when his career moved into television, with programmes for London Weekend Television and Thames Television.

One of the best loved British comedians of all time, Tommy Cooper was a legend in himself. Born as Thomas Frederick Cooper, the lanky lad always had an affinity for magic. At the time of his birth his parents were told that he might not survive infancy; not only did he survive, but he also grew up to be a giant of a young man, towering at 6 4 inches. A magic set gifted by his aunt when he was a kid laid the foundation for his future career. He was employed as a magician on a boat when he was just 16. However his first performance was a failure and people started to laugh. Though hurt at that time, he realized that he could develop a unique style of entertainment if he could combine magic with comedy, and that is what he did. He had to serve in the army during the World War II and during a performance at Cairo he could not find his regular hat and in an impromptu move grabbed a red fez”a traditional hat”and placed it on his head. The audience started laughing so hard at this gesture that the fez became a trademark of the comedian.

He was born to parents Thomas Cooper and Catherine Gertrude. His younger brother David opened up a magic shop in Berkshire, which remained there for decades.

The woman who owned the house his family was living in also helped deliver him as a baby.

He was a member of the Magic Circle.

He was in the British army fighting against Erwin Rommel's forces in North Africa in WWII.