In the 1960s, Robert Francis Kennedy was a well-known politician in the United States. He was President of the United States of America John F. Kennedy's younger brother. For three years, he was a senator from New York, as well as the US Attorney General under his brother. He was a member of the Democratic Party and acted as his brother's campaign manager in the presidential race. Before his killing, he was a top candidate for the Democratic Party's presidential candidacy. Before entering politics, he worked as an attorney in Washington, D.C. He fought corruption in labor organizations and wrote "The Enemy Within," a book about corruption in organized labor unions. He was his brother's White House counselor, and he was active in the African-American civil rights movement and anti-mafia campaigns. He was a vocal opponent of the Vietnam War, and many believe this was the cause for his assassination. As a senator, he worked to help impoverished and disabled pupils, as well as to improve the living conditions of Brooklyn's destitute and downtrodden residents. He also advocated for people's human rights in Latin America, South Africa, and other parts of the globe.

He joined the Naval Reserve as an apprentice seaman shortly before his 18th birthday and went on to Harvard College and the University of Virginia School of Law.

Information about His net worth in 2021 is being updated as soon as possible by infofamouspeople.com, You can also click edit to tell us what the Net Worth of the Robert F. Kennedy is

He was devastated after his brother, John F. Kennedy , was assassinated in 1963, and he supported his sister-in-law, Jacqueline Kennedy Onassis , for the remainder of his life. 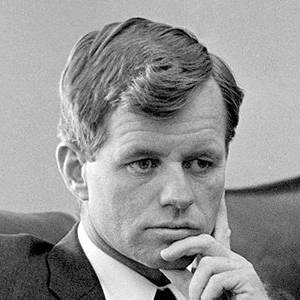