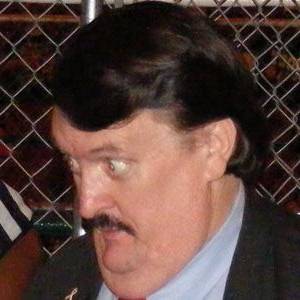 William Alvin Moody was an American professional wrestling manager and licensed funeral director. He is best known for his tenure with the World Wrestling Federation where he performed under the ring name and gimmick of Paul Bearer as the manager of The Undertaker. He's also known for managing his storyline son/Undertaker's storyline half-brother, Kane, as well as Mankind. Outside WWE, he was known by the name Percival "Percy" Pringle III and performed in various regional territories and promotions, as well as World Class Championship Wrestling .

Wrestler and manager for the WCCW and WWE; died at the age of 58 due to gallbladder problems.

His wife Dianna died due to complications from breast cancer in 2009. Together they had two sons named Michael and Daniel.

He was born William Alvin Moody and served in the United States Air Force for four years.

He managed several big-name wrestlers like Kane , Lex Luger , and The Undertaker .

He had fictionalized feuds with wrestler Randy Orton .

The Undertaker ambushes Paul Bearer in his home: Raw, June 22, 1998

The Undertaker on his friendship with Paul Bearer: The Mortician sneak peek

Paul Bearer makes his debut on "The Brother Love Show" by