Born on November 21, 1983 (age 38) in San Diego, California, United States. She is a celebrity Wrestler. Her full name is Stephanie Nicole Garcia-Colace. Nikki Bella has 2 siblings in Her family: Brie Bella, JJ Garcia. She weight is 131 lbs. She height is 5′ 6″.

Only a few female wrestlers have had such an influence on the WWE universe as The Bella Twins. Nikki Bella (Stephanie Nicole Garcia-Colace), an American professional wrestler, model, and actress, is one half of the team. Nikki, who formerly worked for WWE's Smackdown brand, is currently out of commission owing to a lack of fitness. Nikki made her professional wrestling debut in June 2007 after signing with WWE and being assigned to fight in Florida Championship Wrestling. She joined up with her twin sister Brie Bella, and the twins' sneaky movements and power caused quite a commotion in the arena. The Bella Twins, a tandem, was established, and both sisters displayed some incredible skills, making them quick fans of the sport. She made her Smackdown debut in 2008 and went on to win the WWE Divas Championship twice, the second reign lasting a record-breaking 301 days. Nikki is well-known for her television appearances and brand endorsements in addition to her wrestling career. In December 2015, she was named Diva of the Year by Rolling Stone magazine. For her devotion to fitness, she became an inspiration for adolescent females all throughout the United States.

She got engaged to John Cena after he proposed to her at WrestleMania 33 in 2017, but the couple separated a year later. She previously dated Dolph Ziggler . She has a brother named JJ Garcia .

She won her first WWE Divas Championship in 2012.

Information about Her net worth in 2021 is being updated as soon as possible by infofamouspeople.com, You can also click edit to tell us what the Net Worth of the Nikki Bella is

She defeated Beth Phoenix to win the WWE Divas Championship in April 2012.

Nikki Bella's house and car and luxury brand in 2021 is being updated as soon as possible by in4fp.com, You can also click edit to let us know about this information.

● Born on November 21, 1983 (age 38) in San Diego, California, United States ● She is a celebrity wrestler ● Her full name is Stephanie Nicole Garcia-Colace● Nikki Bella has 2 siblings in Her family: Brie Bella, JJ Garcia● She weight is 131 lbs● She height is 5′ 6″ 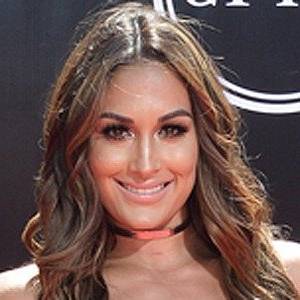