John Robert Wooden was an American basketball coach and player. Nicknamed the "Wizard of Westwood", he won ten National Collegiate Athletic Association national championships in a 12-year period as head coach for the UCLA Bruins, including a record seven in a row. No other team has won more than four in a row in Division I college men's or women's basketball. Within this period, his teams won an NCAA men's basketball record 88 consecutive games. Wooden won the prestigious Henry Iba Award as national coach of the year a record seven times and won the AP award five times.

During his time at Martinsville High School, he reached the state championship finals three times in a row. From 1929 through 1932, he played collegiate basketball for Purdue University.

He was dubbed the Wizard of Westwood, for his constant ability to combine positive thinking with winning strategy.

He was loved by many of the players he coached, one of those being Kareem Abdul-Jabbar , then known as Lew Alcindor. 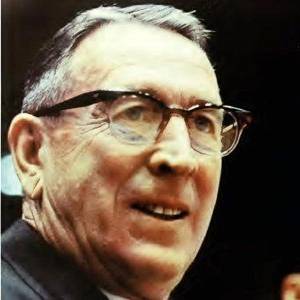