Born on April 16, 1947 (age 75) in New York City, New York, United States. He is a celebrity Basketball player, Actor, Author, Basketball Coach, Screenwriter, Film Producer. His full name is Ferdinand Lewis Alcindor, Jr.. His spouse is Habiba Abdul-Jabbar (m. 1971–1978). He height is 7′ 2″. You can find His website below: https://kareemabduljabbar.com/.

Kareem Abdul-Jabbar is regarded as one of America's best basketball players. He's also a best-selling author and has coached basketball. He played 20 seasons in the National Basketball Association (NBA) before retiring in his illustrious career. Several awards were bestowed upon him as a result of his overwhelming winning streak. He was the NBA's all-time leader in nine categories when he retired, including points scored and games played. He won six NBA titles, once with the Milwaukee Bucks and the other five with the Los Angeles Lakers. He has established himself as one of the most gifted and accomplished personalities in the world. The'skyhook,' his hallmark move, is widely regarded as basketball's most iconic weapon. He began writing and recording his career when he retired. He's also written a number of cultural books and appeared in a number of films and television shows. He has triumphed at practically every step in his relentless career, and he is continuously involved in politics. A documentary was also made on his amazing life. He is presently a contributing writer for the Guardian and a columnist for The Hollywood Reporter.

He had three kids, Habiba, Sultana and Kareem Jr., with Habiba Abdul-Jabbar, who was originally named Janice Brown. He and Habiba were married from 1971 to 1978. He also has two more children named Amir and Adam.

He was born as Ferdinand Lewis Alcindor, Jr. and changed his named to Kareem Abdul-Jabbar after winning his first NBA Championship in 1971.

Information about His net worth in 2021 is being updated as soon as possible by infofamouspeople.com, You can also click edit to tell us what the Net Worth of the Kareem Abdul-Jabbar is

He and Earvin Magic Johnson combined to form a dominant nucleus for the Los Angeles Lakers.

Kareem Abdul-Jabbar's house and car and luxury brand in 2021 is being updated as soon as possible by in4fp.com, You can also click edit to let us know about this information. 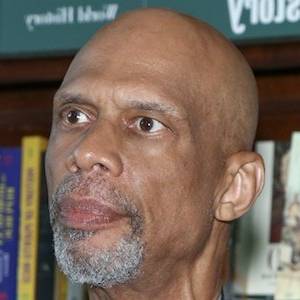