Ashley Mae Sebera is an American professional wrestler, bodybuilder, gymnast, fitness competitor, and model. She is signed to WWE, where she performs on the Raw brand under the ring name Dana Brooke and is the current 24/7 Champion in her fifth reign.

Professional wrestler who joined the NXT division of the WWE in 2013. On April 2015, she made her televised debut in an episode of NXT.

Her birth name is Ashley Mae Sebera and she was born in Seven Hills, Ohio. She dated fellow bodybuilder Dallas McCarver up until his tragic passing in August 2017. In July 2021, she got engaged to boxer Ulysses Diaz.

She spent 18 years training in gymnastics and also competed briefly in diving. She stopped doing gymnastics after sustaining a number of wounds, including two broken ankles.

From 2011 to 2012, she competed as a bodybuilder and held several National Physique Committee titles.

She faced Charlotte in a tag team match at NXT TakeOver: Unstoppable.

Dana Brooke's house and car and luxury brand in 2021 is being updated as soon as possible by in4fp.com, You can also click edit to let us know about this information. 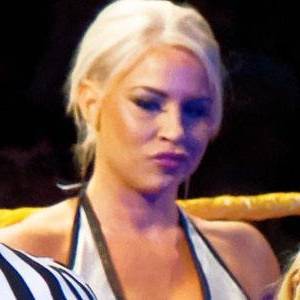