Brock Edward Lesnar is an American professional wrestler and former mixed martial artist, amateur wrestler, and professional football player who holds both American and Canadian citizenship. He is currently signed to WWE, where he performs on the SmackDown brand. Regarded as one of the greatest professional wrestlers and mixed martial artists of all time, he is the only person to hold all of the primary heavyweight championships in WWE, UFC, NJPW, and the NCAA.Lesnar competed in amateur wrestling for the University of Minnesota, winning the NCAA Division I national championship in 2000. He soon signed with the World Wrestling Federation , rising to industry prominence in 2002 by winning the WWE Championship at age 25, setting the record for the youngest performer to win the championship. In 2004, Lesnar departed WWE to join the Minnesota Vikings of the National Football League , but was cut from the team during pre-season. He won the IWGP Heavyweight Championship in 2005 while with NJPW, and he re-signed with WWE in 2012; his 504-day reign as Universal Champion is the seventh-longest world championship reign in the promotion's history. He also won the Royal Rumble match twice, the Money in the Bank ladder match, the King of the Ring tournament, and has headlined several pay-per-view events, including WWE's flagship event WrestleMania five times ; in addition, he also ended The Undertaker's undefeated WrestleMania Streak in 2014.

Brock Edward Lesnar is a popular American wrestler, American football player, as well as a martial artist. He is signed with the WWE and is the WWE Universal Champion, as of June 2017. Born and raised in Webster, South Dakota, Brock became an amateur wrestler and a skilled footballer while he was still in high school. He was a two time state champion in amateur wrestling. He joined the WWE in 2000 and is known for his record of becoming the youngest WWE Champion at just the age of 25. Along with that, he is also the second fastest wrestler to have won the championship since his debut. In 2004, he put his wrestling career on hold to pursue a career in the National Football League. He signed with the Minnesota Vikings, and played several preseason games with the team. In 2006, he also joined K-1's mixed martial arts league. Along with making a cameo appearance in the American biographical sports crime drama film ˜Foxcatcher', Lesnar has appeared in many video games as well, such as ˜WWE Smackdown! Shut Your Mouth' ˜WWE 2K14' and ˜Wrestle Kingdom'. Lesnar was once arrested on suspicion of possessing anabolic steroids. Later the charges were dropped after they were found to be legal growth hormones.

He broke off his engagement with his fiancee Nicole, with whom he had a daughter named Mya Lynn in 2002, in order to start a relationship with fellow wrestler Rena Sable Mero, whom he married in May 2006. He and Rena have two children, Duke and Turk.

He won the NCAA wrestling championships and amassed a 106-5 record in four years of wrestling, and was cut from the Minnesota Vikings during the preseason.

He won the 2010 UFC Heavyweight Championship against Shane Carwin via submission with an arm triangle choke in Las Vegas, Nevada.

Brock Lesnar's estimated Net Worth, Salary, Income, Cars, Lifestyles & many more details have been updated below. Let's check, How Rich is He in 2021-2022? According to Forbes, Wikipedia, IMDB, and other reputable online sources, Brock Lesnar has an estimated net worth of $25 Million at the age of 45 years old in year 2022. He has earned most of his wealth from his thriving career as a Wrestler, American football player, Athlete from United States. It is possible that He makes money from other undiscovered sources

He became the first fighter to beat The Undertaker in a WrestleMania match on April 6, 2014.

Brock Lesnar's house and car and luxury brand in 2021 is being updated as soon as possible by in4fp.com, You can also click edit to let us know about this information. 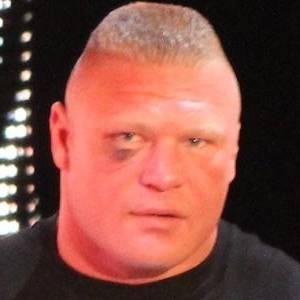