Uma Karuna Thurman is an American actress, producer and fashion model. Prolific in film and television productions encompassing a variety of genres, she had her breakthrough in Dangerous Liaisons , following appearances on the December 1985 and May 1986 covers of British Vogue. Thurman rose to international prominence with her role as Mia Wallace in Quentin Tarantino's Pulp Fiction , for which she was nominated for the Academy Award, the BAFTA Award, and the Golden Globe Award for Best Supporting Actress. Hailed as Tarantino's muse, she reunited with the director to play The Bride in Kill Bill: Volume 1 and 2 , which brought her two additional Golden Globe Award nominations.Established as a Hollywood actress, Thurman's other notable films include Henry & June , The Truth About Cats & Dogs , Batman & Robin , Gattaca , Les Misérables , Paycheck , The Producers , My Super Ex-Girlfriend , Percy Jackson & the Olympians: The Lightning Thief , Lars von Trier's Nymphomaniac and The House That Jack Built , and Hollywood Stargirl . In 2011, she was a member of the jury for the main competition at the 64th Cannes Film Festival, and in 2017, she was named president of the 70th edition's "Un Certain Regard" jury. Thurman made her Broadway debut in The Parisian Woman .

Uma Karuna Thurman is an American actress who rose to fame with her portrayal of Mia Wallace in the dark comedy movie ˜Pulp Fiction' which made the talented actress one of Hollywood's A-list stars. She is a well respected actress who does not think twice before shedding her glamorous image and appearing in a totally deglamourized role as she did in the ˜Kill Bill' movies. She was born into a family known for its unconventional ways of life and was given a Hindu name and a Buddhist upbringing. Growing up, the lanky girl was often made fun of because of her angular frame and large feet. Even though today she is famous for her exotic beauty, there was a time when as a teenager she was highly insecure of herself and her body. She found solace in acting and actively participated in dramatics in high school. Believing that she was meant to be an actress, she quit school at 15 to pursue an acting career. Initially she had to earn her livelihood by doing dishes and modeling though she was soon able to find small roles in films. She got her big breakthrough with the movie ˜Pulp Fiction' and was even more critically acclaimed for her role in the ˜Kill Bill' films.

She was married to Gary Oldman from 1990 until 1992. She married Ethan Hawke in May 1998 and the couple had a daughter named Maya and a son named Levon together before divorcing in 2005. She became engaged to Arpad Busson in 2007. They had a child named Rosalind in July 2012 then separated in 2014.

She was incredibly insecure about her body and herself in general, which was prompted by teasing from her classmates.

She played Medusa in the 2010 film Percy Jackson & the Olympians: The Lightning Thief.

Uma Thurman's estimated Net Worth, Salary, Income, Cars, Lifestyles & many more details have been updated below. Let's check, How Rich is She in 2021-2022? According to Forbes, Wikipedia, IMDB, and other reputable online sources, Uma Thurman has an estimated net worth of $45 Million at the age of 52 years old in year 2022. She has earned most of her wealth from her thriving career as a Actor, Model, Film Producer, Screenwriter, Television producer from United States. It is possible that She makes money from other undiscovered sources

She starred in Kill Bill with Lucy Liu.

Uma Thurman's house and car and luxury brand in 2021 is being updated as soon as possible by in4fp.com, You can also click edit to let us know about this information.

The Real Reason We Don't See Much Of Uma Thurman Anymore 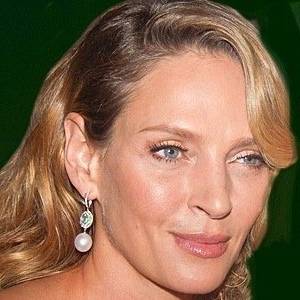