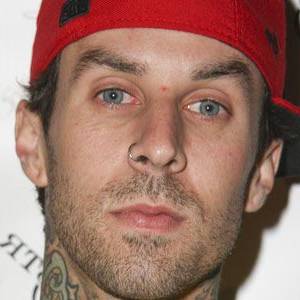 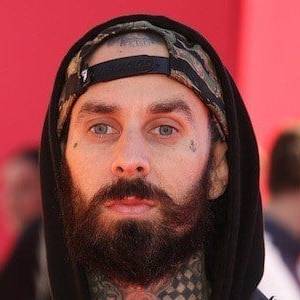 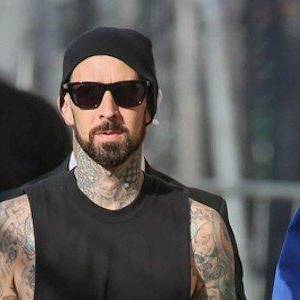 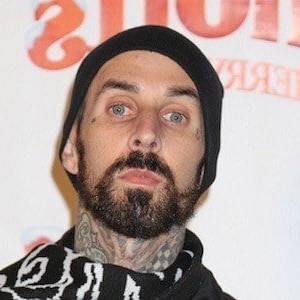 Travis Landon Barker is an American musician who serves as the drummer for the rock band Blink-182. He has also performed as a frequent collaborator with hip hop artists, is a member of the rap rock group Transplants, founded the rock bands +44 and Box Car Racer, and thereafter joined Antemasque and Goldfinger. Barker was a frequent collaborator with the late DJ AM, and together they formed TRV$DJAM. Due to his fame, Rolling Stone referred to him as "punk's first superstar drummer" as well as one of the 100 greatest drummers of all time.Born in Fontana, California, Barker began drumming at an early age. He began playing for The Aquabats in 1996, but left to join Blink-182 in 1998, which encountered mainstream success with Enema of the State . Barker established himself as a versatile drummer, producing and making guest appearances in music projects of numerous music genres including hip hop, alternative rock, pop, and country. He also starred in an MTV reality series named Meet the Barkers. He was involved in a plane crash in 2008, but he recovered and released his debut solo album, Give the Drummer Some, in 2011. He has continued to work with rappers, releasing extended plays with Yelawolf, Asher Roth, and Nottz, as well as with Blink-182 and the Transplants.

Not everyone with the drum sticks in the hands can boast of playing the instrument like Travis Barker! Recognized as ˜Punk's first superstar drummer' by Rolling Stone magazine, he is the immaculate drumming star of the era, who reaffirmed the status of the music of the drums. A prodigious child, Barker's association with the drums has been since he was four-years-old. As time passed, he only mastered the art and polished his skills to become at par with the world's best drummers. Barker's first outing as a drummer was for Feeble, a school band. The split of Feeble led him to explore more options. Eventually he found a place with The Aquabats. His career took a major turn when a chance inclusion as filler for Rayne in the band, Blink-182 proved to be the momentous occasion as he was soon roped in by the band. Record after record, the band gained much popularity as their songs became hit chartbusters. Apart from his association with the band, Barker has been a frequent performer and collaborator with hip-hop artists, the alternative rock band ˜+44', the rap rock group ˜The Transplants', and the alternative rock band ˜Box Car Racer'. In 2011, he even came out with a solo venture titled, ˜Give the Drummer Some'. In addition to the drumming he also owns a clothing company and a records label.

He was briefly married to Melissa Kennedy from September 2001 to August 2002. He was also married to Shanna Moakler from 2004 until 2008. He has children named Landon and Alabama Luella.

He dreamed of becoming a pro surfer and skateboarder and began playing the drums at the age of four.

He has performed with a number of hip-hop artists and he was also a member of The Transplants, Box Car Racer and Plus Forty-four.

Travis Barker's estimated Net Worth, Salary, Income, Cars, Lifestyles & many more details have been updated below. Let's check, How Rich is He in 2021-2022? According to Forbes, Wikipedia, IMDB, and other reputable online sources, Travis Barker has an estimated net worth of $50 Million at the age of 46 years old in year 2022. He has earned most of his wealth from his thriving career as a Musician, Record producer, Drummer, Songwriter, Fashion designer, Entrepreneur, Actor from United States. It is possible that He makes money from other undiscovered sources

He was a part of Blink-182 with Tom DeLonge and Mark Hoppus. He and Hoppus later formed the punk rock group +44.

Travis Barker's house and car and luxury brand in 2021 is being updated as soon as possible by in4fp.com, You can also click edit to let us know about this information. 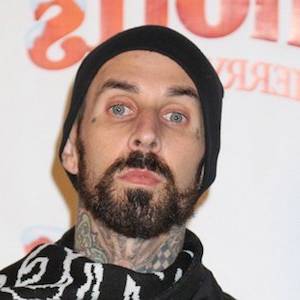