Sir Thomas Jones Woodward (born 7 June 1940), known professionally as Tom Jones, is a Welsh singer. His career began with a string of top-ten hits in the mid-1960s. He has toured regularly, with appearances in Las Vegas (1967–2011). Jones's voice has been described by AllMusic as a "full-throated, robust baritone".His performing range has included pop, R&B, show tunes, country, dance, soul and gospel. In 2008, the New York Times called Jones a musical "shape shifter", who could "slide from soulful rasp to pop croon, with a voice as husky as it was pretty". Jones has sold over 100 million records, with 36 Top 40 hits in the UK and 19 in the US, including "It's Not Unusual", "What's New Pussycat?", the theme song for the 1965 James Bond film Thunderball, "Green, Green Grass of Home", "Delilah", "She's a Lady", "Kiss" and "Sex Bomb".Jones has also occasionally dabbled in acting, first making his acting debut playing the lead role in the 1979 television film Pleasure Cove. He also appeared as himself in Tim Burton's 1996 film Mars Attacks!. In 1970 he received a Golden Globe Award for Best Actor – Television Series Musical or Comedy nomination for hosting the television series This Is Tom Jones. In 2012, he played his first dramatic acting role in an episode of Playhouse Presents. Jones received a Grammy Award for Best New Artist in 1966, an MTV Video Music Award in 1989, as well as two Brit Awards: Best British Male in 2000 and the Outstanding Contribution to Music award in 2003. Jones was appointed Officer of the Order of the British Empire (OBE) in 1998 and knighted by Queen Elizabeth II for services to music in 2005. Jones experienced a resurgence in notability in the 2010s due to his coaching role on the television talent show The Voice UK from 2012.

One of the most well-known singers of today's generation, Tom Jones is a Welsh singer who has been entertaining the audiences since the 1960s. A musical genius, he has sung and excelled in several genres of music which include pop, rock, R&B, show tunes, country, dance, soul and gospel. Many of his albums and songs have been immensely successful and have sold millions of copies. As he rose to stardom, he was offered several films, which, he declined and went on to say that I've been asked to do things “ films and that “ in the past, but they were always too cheesy, and always musicals. Today, his success is nearly unparalleled, while, keeping in mind the fact that he is 73 and is still able to perform in the same manner as he used to during his younger days. Even after winning several awards and being bestowed with the most prestigious of honors including knighthood by the Queen, Jones shows no signs of slowing down. His enthusiasm and the burning passion for music are ceaseless! He is an artiste at heart and continues to perform at several important and prestigious events, all over the world. Learn more about his life and career in the article below.

He married Linda Trenchard on March 2, 1957 and they had one child together. He dated model Katherine Berkery in 1987, and denied that he was the father of her son, Jonathan Berkery, until 2008.

When he was twelve, he spent two years listening to music and drawing while bedridden with tuberculosis. One of his first groups was the beat group Tommy Scott and the Senators.

He has sold over 100 million records and was invited to be one of the judges on the UK's version of The Voice.

Tom Jones's estimated Net Worth, Salary, Income, Cars, Lifestyles & many more details have been updated below. Let's check, How Rich is He in 2021-2022? According to Forbes, Wikipedia, IMDB, and other reputable online sources, Tom Jones has an estimated net worth of $300 Million at the age of 82 years old in year 2022. He has earned most of his wealth from his thriving career as a Actor, Musician, Singer from Wales. It is possible that He makes money from other undiscovered sources

He was knighted by Queen Elizabeth II in 2006 at Buckingham Palace.

Tom Jones's house and car and luxury brand in 2021 is being updated as soon as possible by in4fp.com, You can also click edit to let us know about this information.

Best of The Voice - 1 year ago

The Ed Sullivan Show - 1 year ago

The Ed Sullivan Show - 1 year ago

The Skeleton - 3 years ago

Tom Jones, The Cardigans - Burning Down The House (Official Video) 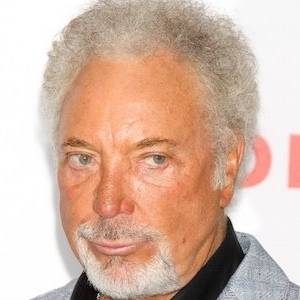