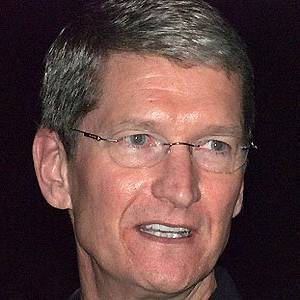 Timothy Donald Cook (born November 1, 1960) is an American business executive and engineer who has been the chief executive officer of Apple Inc. since 2011. Cook previously served as the company's chief operating officer under its co-founder Steve Jobs.Cook joined Apple in March 1998 as a senior vice president for worldwide operations, and then served as the executive vice president for worldwide sales and operations. He was made the chief executive on August 24, 2011, prior to Jobs' death in October of that year. During his tenure as the chief executive, he has advocated for the political reformation of international and domestic surveillance, cybersecurity, American manufacturing, and environmental preservation. Since 2011 when he took over Apple, to 2020, Cook doubled the company's revenue and profit, and the company's market value increased from $348 billion to $1.9 trillion.In 2014, Cook became the first chief executive of a Fortune 500 company to publicly come out as gay. Cook also serves on the boards of directors of Nike, Inc. and the National Football Foundation; he is a trustee of Duke University, his alma mater. Outside of Apple, Cook engages in philanthropy, and in March 2015, he said he planned to donate his fortune to charity.

Tim Cook is an American business executive who succeeded Steve Jobs as the Chief Executive Officer (CEO) of Apple Inc. in 2011. Even before officially assuming the title of the CEO, he had served as the acting CEO during Jobs' long medical leave in the months preceding the former Apple CEO's death. From the time he joined Apple as a Senior Vice President (SVP) of Worldwide Operations in 1998, Tim Cook has been instrumental in leading the company from one success to another. In fact Apple was going through a tough phase when Cook accepted to join it and his role in resurrecting the company has been immense. Born into a middle class home in a small town, Cook is a self-made man. A good student in school, he went on to study industrial engineering from the Auburn University in Alabama before completing his MBA degree from the Duke University's Fuqua School of Business. He entered the field of computer technology and started working for IBM. Brilliant, creative and blessed with a steely determination, Cook rose up the ranks within the company rapidly. Eventually he moved on to work for Compaq. But his stint at Compaq was short-lived as he soon left to join the then-struggling Apple and changed the company's fortunes within years of joining.

He was born in Robertsdale, Alabama to Geraldine and Donald Cook. He was inducted into the Alabama Academy of Honor in 2014.

He graduated with an MBA from Duke University, rising through to an executive position at IBM before joining Apple in 1998.

He was the highest-paid CEO in the world in 2012, with a compensation package totaling $378 million. He was the Financial Times Person of the Year in 2014.

Tim Cook's estimated Net Worth, Salary, Income, Cars, Lifestyles & many more details have been updated below. Let's check, How Rich is He in 2021-2022? According to Forbes, Wikipedia, IMDB, and other reputable online sources, Tim Cook has an estimated net worth of $2 B at the age of 61 years old in year 2022. He has earned most of his wealth from his thriving career as a business executive from United States. It is possible that He makes money from other undiscovered sources

He took over as Apple's CEO following the resignation of Steve Jobs, who died six weeks later.

Tim Cook's house and car and luxury brand in 2021 is being updated as soon as possible by in4fp.com, You can also click edit to let us know about this information.

A Day In The Life Of Tim Cook (Apple's CEO)

The Success Call - 11 months ago

A Day In The Life Of Tim Cook

Tim Cook: Apple's Business Is About Changing the World

Duke University - The Fuqua School of Business - 9 years ago

Duke University - The Fuqua School of Business - 9 years ago