Ivana Marie "Ivanka" Trump (; born October 30, 1981) is an American businesswoman and the first daughter of former President Donald Trump; she was a senior advisor in his administration, and also was the director of the Office of Economic Initiatives and Entrepreneurship. She is the daughter of Trump's first wife, Ivana, and is the first Jewish member of a first family, having converted before marrying her husband, Jared Kushner.She was an executive vice president of the family-owned Trump Organization. She was also a boardroom judge on her father's TV show, The Apprentice. Starting in March 2017, Trump left the Trump Organization becoming a senior adviser in her father's presidential administration alongside Jared Kushner. After ethics concerns were raised about her having access to classified material while not being held to the same restrictions as a federal employee, Trump agreed to voluntarily file "financial disclosure forms required of federal employees and be bound by the same ethics rules". While serving in the White House, she continued to operate her clothing brand business until July 2018, which also raised ethics concerns, specifically conflicts of interest. Trump was considered part of the president's inner circle even before becoming an official employee in his administration.

Ivanka Trump is a businesswoman, television personality, fashion designer, and author from the United States. She is more popularly known as President Donald Trump's first daughter and is an official senior advisor to the president. She is a former executive vice-president of the Trump Organization. She was primarily recognized for her fashion and cosmetics business, which promoted the Trump company, before entering politics. She formally stood aside from her employment at the Trump Organization when her father was elected President of the United States and served as an unofficial counselor to the President. She was formally designated Advisor to the President two months later. She is now seen attending significant meetings across the world with her father, where Ivanka mostly advocates on policy improvements affecting women and women's entrepreneurship. Ivanka Trump has accompanied Donald Trump on several formal visits to places throughout the world since he became office. She is interested in charity and supports a variety of causes in addition to politics. She's also the author of a few self-help books. She presently resides in Washington, D.C., with her family.

Her parents are US President Donald Trump and Ivana Trump . She married Jared Kushner in 2009 and the couple has a daughter named Arabella and two sons named Joseph and Theodore.

She studied at the University of Pennsylvania's Wharton School of Business.

Her first magazine appearance was in a 1997 issue of Seventeen.

Ivanka Trump's house and car and luxury brand in 2021 is being updated as soon as possible by in4fp.com, You can also click edit to let us know about this information.

● Ivanka Trump was born on October 30, 1981 (age 40) in New York City, New York, United States ● She is a celebrity business executive ● She attended Wharton School of the University of Pennsylvania (2004)● The parents of Ivanka Trump are Donald Trump, Ivana Trump● She had 3 children Arabella Rose Kushner, Theodore James Kushner, Joseph Frederick Kushner● Her spouse is Jared Kushner (m. 2009)● Her height is 5ft 10 (178cm)● You can find Her website below: http://www.ivankatrump.com/ 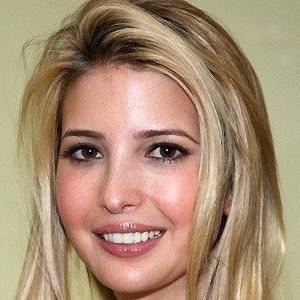