Stanley Martin Lieber, popularly known as Stan Lee, was an American comic book writer, editor, publisher, media producer, television host, actor, and voice actor. He started out his career working as an office boy for the Marvel Comics““which meant fetching lunch, proof reading and refilling artist's ink jars, eventually proving his creative talent, escalated from the position of interim editor to the president of the entire company. He is known for creating superheroes like ˜Spider-Man', ˜The Hulk', ˜X-men', ˜Iron Man', ˜Thor', ˜Doctor Strange', etc. and gained nationwide popularity when he created the superhero series ˜The Fantastic Four' in which he made his superheroes imperfect rather than selling the idea of a perfectly capable superhero. He created these superheroes in collaboration with his colleagues, Jack Kirby and Steve Ditko. He is said to have brought in revolution in the comic world through his satirical writing and bringing in the elements of the real world into the world of these superheroes, which is how he used to make these superheroes viable and responsible. It was Lee who made Marvel Comics a multimedia corporation from just a small division of a publishing house. Apart from creating superheroes and writing story plots for the comics, he also wrote weekly columns and produced many superhero based ventures through his production company.

His father was a dress cutter who could only find occasional work after the Great Depression destroyed his career. He consumed numerous books and movies growing up, especially loving the heroic films of Errol Flynn. He married Joan Lee on December 5, 1947 and they had a daughter named J.C. Lee in 1950. Their second daughter, Jan, died shortly after delivery in 1953.

He worked several part-time jobs in his youth, some of which included writing obituaries for newspapers and writing press releases for the National Tuberculosis Center. His uncle, Robbie Solomon, helped him get a job at Timely Comics as an assistant in 1939, which would eventually become Marvel Comics in 1960.

He was born Stanley Martin Lieber, but chose to break his first name into two parts for his comic book pen name. He reserved his full name for his "more literary aspirations," which never came to fruition.

Information about His net worth in 2021 is being updated as soon as possible by infofamouspeople.com, You can also click edit to tell us what the Net Worth of the Stan Lee is

He made many cameo appearances in Hollywood movies based on his characters, including in 2004's Spider-Man 2, where he was a bystander in the crowd attacked by James Franco's character, the Green Goblin. 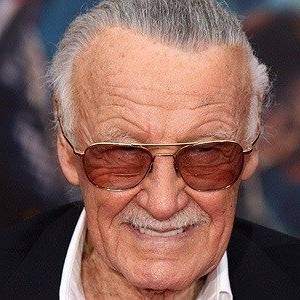