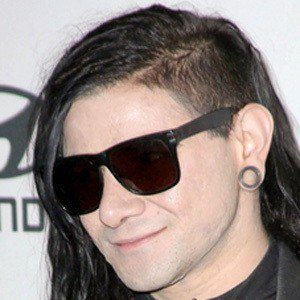 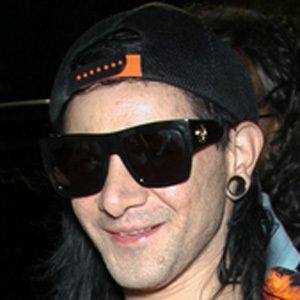 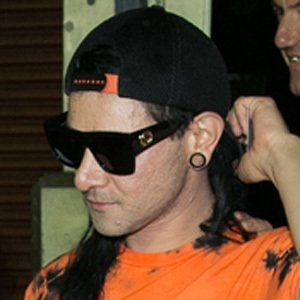 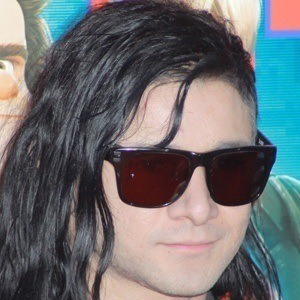 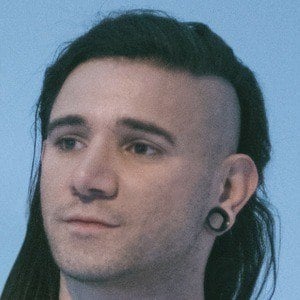 Sonny John Moore , known professionally as Skrillex, is an American DJ and music producer. Growing up in Northeast Los Angeles and Northern California, he joined the post-hardcore band From First to Last as the lead singer in 2004, and recorded two studio albums with the band before leaving to pursue a solo career in 2007. He began his first tour as a solo artist in late 2007. After recruiting a new band lineup, Moore joined the Alternative Press Tour to support bands such as All Time Low and the Rocket Summer, and appeared on the cover of Alternative Press' annual "100 Bands You Need to Know" issue.After releasing the Gypsyhook EP in 2009, Moore was scheduled to record his debut studio album, Bells, with producer Noah Shain. He ceased production of the album, however, and began performing under the name Skrillex, distributing the My Name Is Skrillex EP for free download on his official MySpace page. Subsequently, he released the Scary Monsters and Nice Sprites EP in late 2010 and More Monsters and Sprites EP in mid-2011, both of which have since become moderate commercial successes. On November 30, 2011, he received five Grammy Award nominations at the 54th Grammy Awards, including Best New Artist and won three: "Best Dance/Electronica Album", "Best Dance Recording", and "Best Remixed Recording, Non-Classical". In December 2011, the BBC announced that he had been nominated for their Sound of 2012 poll. The same month, he was also named MTV's Electronic Dance Music Artist of the Year.Skrillex has won eight Grammy Awards, more than any other electronic dance music artist. Skrillex has collaborated with Diplo and Boys Noize to form the groups Jack Ü and Dog Blood respectively. It was announced on Moore's 29th birthday, that he reunited with From First to Last and released a single named "Make War". In 2017, Skrillex produced and mixed 8, the eighth studio album by rock band Incubus. In July 2017, Skrillex released another single featuring debuting solo artist Poo Bear.

Skrillex is an American singer, songwriter, instrumentalist, music producer, and DJ who is acclaimed for his music videos and albums like ˜First of the Year', ˜Bangarang', and ˜My Name is Skrillex'. His career as a musician and singer took off when he volunteered to play the guitar for the rock band ˜From First to Last', but was instead chosen as the lead vocalist. Skrillex, during his association with the band, contributed significantly towards the launch of albums including ˜Heroine' and ˜Dear Diary, My Teen Angst Has a Body Count' but eventually left to chart a solo career. As a soloist, Skrillex joined forces with bands like ˜All Time Low', Forever the Sickest Kids', ˜The Matches', and ˜All Time Low' during countrywide music tours. ˜Gypsyhook EP' was his debut extended play (EP) to be launched commercially, and following its release, Sonny began recording his first studio LP ˜Bells' but eventually called it off. He resumed performing and recording albums using his stage name ˜Skrillex'. The first EP ˜My Name is Skrillex' he recorded under his nom-de-plume was available for download free of cost via his official MySpace profile. Skrillex has bagged eight Grammy Awards till date.

He began dating artist and singer Ellie Goulding, who sang on the song "Summit" in February 2012. The couple separated in October 2012.

He attended a boarding school in the Mojave Desert in California and started being home schooled at age 14 after being bullied. Before becoming well known, he released songs and demos on the social network site MySpace.

He won three Grammy Awards in 2013 for the album Bangarang, including one for "Promises," which he recorded with Nero.

Skrillex's estimated Net Worth, Salary, Income, Cars, Lifestyles & many more details have been updated below. Let's check, How Rich is He in 2021-2022? According to Forbes, Wikipedia, IMDB, and other reputable online sources, Skrillex has an estimated net worth of $70 Million at the age of 34 years old in year 2022. He has earned most of his wealth from his thriving career as a Guitarist, Singer, Disc jockey, Musician, Record producer, Singer-songwriter, Electronic musician from United States. It is possible that He makes money from other undiscovered sources

He is joined by Diplo in the duo Jack U.

Skrillex's house and car and luxury brand in 2021 is being updated as soon as possible by in4fp.com, You can also click edit to let us know about this information.

● Skrillex was born on January 15, 1988 (age 34) in Los Angeles, California, United States ● He is a celebrity dj ● His genres are Electronic dance music, Dubstep, Electro house, Trap music, Moombahton, Post-hardcore● His popular songs are BangarangDeadpool 2 (Original Motion Picture Soundtrack) · 2018, Make It Bun DemTape Leader · 2013 and First Of The Year2011 ● His height is 5 ft 4 in (1.63 m)● You can find His website below: http://skrillex.com/ 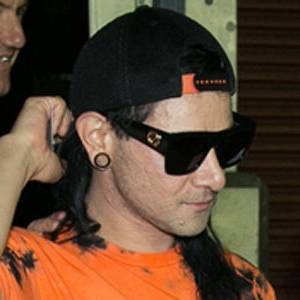