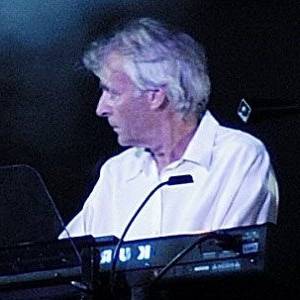 Richard William Wright was an English musician who was a co-founder of the progressive rock band Pink Floyd. He played keyboards and sang, appearing on almost every Pink Floyd album and performing on all their tours. He was inducted into the Rock and Roll Hall of Fame in 1996 as a member of Pink Floyd.

Multi-instrumentalist for Pink Floyd, a seminal psychedelic rock band. He contributed to the tones of the famous albums Dark Side of the Moon and Wish You Were Here by playing keyboards and singing backup vocals.

He was born in Middlesex, England, where his father was a biochemist.

In his early teens, he taught himself to play trumpet, piano, and guitar.

After his time with Pink Floyd, he formed a band called Zee with Dave Harris, a former member of the band Fashion. They released their only album, Identity, in 1984.

He co-founded Pink Floyd along with singer/songwriter Syd Barrett .