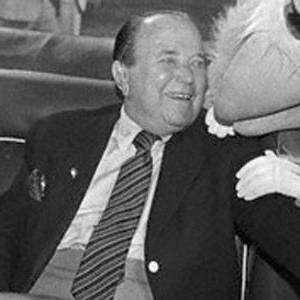 Raymond Albert Kroc was an American businessman. He purchased the fast food company McDonald's in 1961 and was its CEO from 1967 to 1973. Kroc is credited with the global expansion of McDonald's, turning it into the most successful fast food corporation in the world. Due to the company's growth under Kroc, he has also been referred to as the founder of the McDonald's Corporation. After retiring from McDonald's, he owned the San Diego Padres of Major League Baseball from 1974 until his death in 1984.

Raymond Albert Kroc, better known as Ray Kroc, was an American businessman who revolutionized the fast food market by establishing McDonald's as the world's largest fast food franchise. Kroc, who was once dubbed the "service sector's Henry Ford" by Harvard Business School, had a humble beginning. At the age of 51, he met the McDonald brothers, who managed a modest but popular fast food establishment in California, and began selling various goods such as paper cups and milkshake mixers. Following that, he bought a small-scale McDonald's Corporation franchise and turned it into one of the world's most successful fast food companies. At the age of 59, Ray Croc purchased the company. He also used standardization to ensure that McDonald's cuisine tastes the same in all of their locations. With his newly devised operational and delivery system, Kroc transformed the American restaurant sector. The network had 7,500 locations throughout the world at the time of his death, with gross sales of $8 billion.

He was married three times, with two of his marriages lasting for more than 30 years.

During World War I, he served as an ambulance driver for the Red Cross illegally. In 1954, he began working for the corporation.

He was the owner of the San Diego Padres baseball team from 1974 until 1984. He and Colonel Harland Sanders of Kentucky Fried Chicken fame both experienced late-in-life success after they had both turned 50.

He was included in Time 100: The Most Important People of the Century along with Oprah Winfrey .