Rami Malek is an American actor known for his role in the ˜Night at the Museum' film trilogy and also his role in the TV series ˜Mr. Robot'. Born in Los Angeles, he attended the University of Evansville in Indiana, from where he received his Bachelor of Fine Arts degree. His first important work on TV was a recurring role in the American sitcom ˜The War at Home'. He made his film debut playing the role of Pharaoh Ahkmenrah in the fantasy comedy film ˜Night at the Museum'. He reprised his role in the sequels ˜Night at the Museum: Battle of the Smithsonian' as well as ˜Night at the Museum: Secret of the Tomb'. Developing a penchant for acting in fantasy movies, he went on to appear in ˜The Twilight Saga: Breaking Dawn- Part 2', the last film of the famed Twilight Saga movie series. Also active on TV, he became best known for his lead role in the drama thriller series ˜Mr. Robot', which has earned much critical acclaim. He played the role of Elliot Alderson, a cybersecurity engineer and hacker, which earned him an Emmy Award for his performance in the ˜Outstanding Lead Actor in a Drama Series. Recently, he was invited to become a member of the Academy of Motion Picture Arts and Sciences.

He has a twin brother named Sami and is of Egyptian descent.

He had minor roles in TV shows such as Gilmore Girls and Medium.

He played the role of Benjamin in the final Twilight film, Twilight Saga: Breaking Dawn - Part 2. He later would play Freddie Mercury in Bohemian Rhapsody.

Information about His net worth in 2021 is being updated as soon as possible by infofamouspeople.com, You can also click edit to tell us what the Net Worth of the Rami Malek is

He played a role in the TV miniseries The Pacific, which Steven Spielberg executive produced.

Rami Malek's house and car and luxury brand in 2021 is being updated as soon as possible by in4fp.com, You can also click edit to let us know about this information. 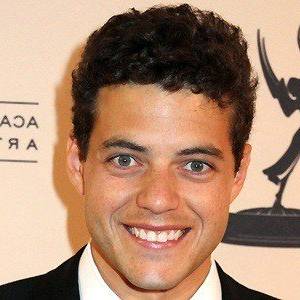