Freddie Mercury was a British singer and songwriter, who achieved worldwide fame as the lead vocalist of the rock band Queen. Regarded as one of the greatest singers in the history of rock music, he was known for his flamboyant stage persona and four-octave vocal range. Mercury defied the conventions of a rock frontman with his theatrical style, influencing the artistic direction of Queen.

Freddie Mercury was a well-known singer and composer who rose to prominence as the lead singer of the rock band 'Queen.' From an early age, he was musically oriented, and according to acquaintances, he could listen to any song and perform the tune on the piano. He founded his own music group, 'Queen,' with musicians Brian May and Roger Taylor, after singing for a few short-lived ensembles. The band rose to prominence in the 1970s, with classics such as 'Bohemian Rhapsody' and 'We Are the Champions.' This great vocalist was well-known for his live performances, having appeared in over 700 of them. His colorful attitude on stage, as well as his vocal range, were hallmarks of his performances. The monodrama 'Mercury: The Afterlife and Times of a Rock God' is based on the life of this legendary vocalist. He's also been named one of the '100 Greatest Britons' by the BBC and one of the 'Top 100 Singers of All Time' by 'Rolling Stone' magazine. Since his death as the first prominent rock star to succumb to AIDS, many groups, including 'The Mercury Phoenix Trust,' created by members of the 'Queen' band, have held concerts to raise cash for AIDS research.

He was in a relationship with Jim Hutton, a hairdresser, from 1985 until 1991, when Mercury died of bronchopneumonia, which was brought on by AIDS.

He listened to the songs he had heard on the radio when he was 12 years old again and again. Ibex was the name of one of his first big bands.

Queen's hit "We Will Rock You" was listed as one of the top 500 Greatest Songs of All Time by Rolling Stone magazine and was inducted into the Grammy Hall of Fame in 2009.

He was joined by guitarist Brian May in Queen. May composed the songs "Fat Bottomed Girls" and "We Will Rock You" for the band.

Queen - We Will Rock You (Official Video) 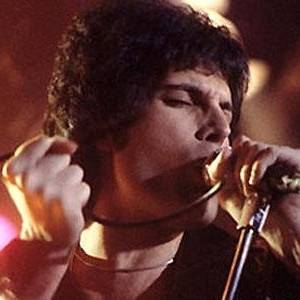