Princess Estelle was born on February 23, 2012 (age 10) in Sweden. She is a celebrity royalty. The parents of Princess Estelle are Victoria, Crown Princess of Sweden, Prince Daniel, Duke of Västergötland.

She was born to Prince Daniel, Duke of Västergötland, and Crown Princess Victoria of Sweden, and is a member of Swedish royalty. She was born second in line to the throne of her country, behind her mother, as the granddaughter of King Carl XVI Gustaf.

In the first two years of her life, she was present at both the wedding of of her aunt, Princess Madeleine , and at the baptism of her cousin, Princess Leonore .

She was baptized in Stockholm Palace's chapel on May 22, 2012, in the presence of many godparents, including her aunt and uncle Prince Carl Philip and Anna Westling Söderström.

Born Estelle Silvia Ewa Mary, she received the title of Her Royal Highness Princess Estelle of Sweden, Duchess of Östergötland.

Her mother, Princess Victoria of Sweden , became heir to the throne in 1980, when the Swedish royal succession laws were changed to allow first-born female heirs to supersede later-born male heirs in the royal line.

Princess Estelle's house and car and luxury brand in 2021 is being updated as soon as possible by in4fp.com, You can also click edit to let us know about this information.

● Princess Estelle was born on February 23, 2012 (age 10) in Sweden ● She is a celebrity royalty ● The parents of Princess Estelle are Victoria, Crown Princess of Sweden, Prince Daniel, Duke of Västergötland

Top 9 Royaltys, princesses of the year 2021 by vote 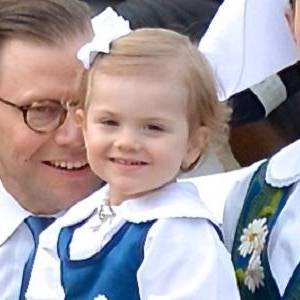