How old is: 51 years Female

Padma Lakshmi is an award-winning author, model, and cooking guru who was born in India. She was the very first Indian model to work in Paris, Milan, and New York. Her modeling job led to her acting career, and she began appearing in Hollywood, Bollywood, and European television shows. For her first cookbook, Easy Exotic, she received the Gourmand World Cookbook Awards' Best First Book award. Her book, Love, Loss, and What We Ate, was a New York Times best-seller when it was released on International Women's Day. Padma is also an executive producer and a television host. Since 2006, she has hosted the US reality television show Top Chef, for which she was nominated for an Emmy Award for Outstanding Host for a Reality Program. Padma is a well-known businesswoman who heads many of her firms, including Padma's Easy Exotic, which sells a variety of frozen foods, and Padma Collection, which sells home décor. Padma is an ambassador for the ACLU and the winner of the NECO Ellis Island Medal of Honor.

She was married to British Indian novelist Salman Rushdie for three years. She has a daughter named Krishna Thea Lakshmi-Dell.

At the age of fourteen, she was involved in an automobile accident that left obvious scars on her right arm.

She wrote the cookbook Easy Exotic, which highlights her cultural roots.

Information about Her net worth in 2021 is being updated as soon as possible by infofamouspeople.com, You can also click edit to tell us what the Net Worth of the Padma Lakshmi is

She had a small role in the film Glitter, which starred Mariah Carey .

Padma Lakshmi's house and car and luxury brand in 2021 is being updated as soon as possible by in4fp.com, You can also click edit to let us know about this information.

Padma Lakshmi On Conversations About Race With Daughter

Padma Lakshmi Opens Up About Being Raped At Age 16 | TODAY

The Bold And Beautiful - Padma Lakshmi

First We Feast - 5 years ago

The Food Channel - 11 years ago 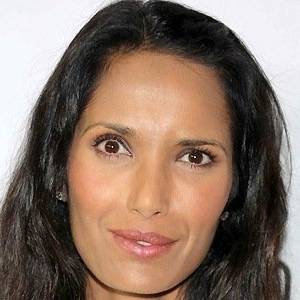