Muhammad Ali, dubbed "The Greatest," was a legend in the sport of professional boxing. He was an imposing figure in the ring, at 6 feet 3 inches tall and known for his quick footwork and strong jab. What sets him apart from his peers are the values he has upheld throughout his life. Ali had converted to Islam and changed his name from Cassius Marcellus Clay, an outspoken supporter of religious freedom and racial justice. He made waves in professional boxing when he knocked out then-heavyweight champion Sonny Liston at the age of 22. He is one of the most well-known sports figures of the last 100 years. From then on, this formidable fighter didn't look back, knocking out each of his opponents to claim the titles. Ali won 56 fights in his career, 37 of them were knockouts, and he lost five. The fights against Liston, Joe Frazier, and George Foreman were the most historic. He became the first and only man to win the World Heavyweight Championship three times in a row. Interestingly, Ali was not only powerful and domineering, but he was also incredibly outspoken, and he began the routine of hurling insults at his opponent long before the brawl. Continue reading to get more interesting facts about his life.

He married his first wife Sonji Roi in 1964 and they divorced in 1966. He was then married to Belinda Boyd from 1967 to 1977 and Veronica Porsche Ali from 1977 to 1986 before marrying Yolanda Williams in 1986. He had a total of nine children, and his youngest daughter, Laila , had a celebrated boxing career.

At the Summer Olympic Games in Rome in 1960, he won the gold medal in the light heavyweight division.

His boxing style was described as fast, strong, and graceful, and he developed the famous slogan "Float like a butterfly, sting like a bee."

Information about His net worth in 2021 is being updated as soon as possible by infofamouspeople.com, You can also click edit to tell us what the Net Worth of the Muhammad Ali is

He developed a close friendship with sports reporter Howard Cosell during his boxing career.

Muhammad Ali - The Greatest of All Time

The World of Boxing! - 3 years ago 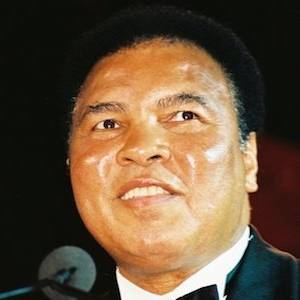