Milica Bogdanovna Jovovich , known professionally as Milla Jovovich, is an American actress, supermodel, and singer. Her starring roles in numerous science-fiction and action films led the music channel VH1 to deem her the "reigning queen of kick-butt" in 2006. In 2004, Forbes determined that she was the highest-paid model in the world.Born in Kiev, Ukrainian SSR, Soviet Union, Jovovich emigrated with her parents to London when she was five, and then to Sacramento, California; they finally settled in Los Angeles seven months later. In 1987, at the age of 12, she began modeling when Herb Ritts photographed her for the cover of the Italian magazine Lei. Richard Avedon featured her in Revlon's "Most Unforgettable Women in the World" advertisements. In 1988, Jovovich made her screen debut in the television film The Night Train to Kathmandu and appeared in her first feature film, Two Moon Junction.

Milla Jovovich is described as the "reigning queen of kick-butt." She is an American model, actress, fashion designer, and singer. She began modeling at an early age and was not even in her teens when she was featured on a magazine cover for the first time. She is a talented actress who credits her success to her beauty and extraordinary abilities. Her early films such as 'Blue Lagoon' (1991) and 'Dazed and Confused' (1993) helped her gain notoriety, but it was Luc Besson's picture 'The Fifth Element' that launched her to stardom. She never looked back after her success and went on to star in a number of science fiction and action pictures. With the publication of the 'Divine Comedy,' she became well-known not only for her acting abilities and modeling endeavors, but also for her aptitude as a singer, song composer, and musician. For her diverse range of work, she received several accolades and distinctions. She also volunteers for a number of charities, including the Ovarian Cancer Research Fund. She continues to captivate audiences across the world with her dynamic performances as an actor and great songs.

She began dating Paul W. S. Anderson and the couple welcomed their daughter, Ever , in 2007. The couple married in 2009. They welcomed a second daughter, Dashiel Edan, in 2015. She was previously married to actor Shawn Andrews in 1992 and director Luc Besson from 1997 to 1999.

Before going into acting, she had a successful modeling career.

She starred in the Resident Evil films, and VH1 has called her "the reigning queen of kick-butt."

Milla Jovovich's estimated Net Worth, Salary, Income, Cars, Lifestyles & many more details have been updated below. Let's check, How Rich is She in 2021-2022? According to Forbes, Wikipedia, IMDB, and other reputable online sources, Milla Jovovich has an estimated net worth of $80 Million at the age of 46 years old in year 2022. She has earned most of her wealth from her thriving career as a Supermodel, Fashion designer, Singer, Actor, Musician, Film Producer, Voice Actor from Ukraine. It is possible that She makes money from other undiscovered sources

She had a good advertisement career with big labels such as Donna Karan .

Milla Jovovich's house and car and luxury brand in 2021 is being updated as soon as possible by in4fp.com, You can also click edit to let us know about this information.

▶
Actresses and actors - 3 months ago 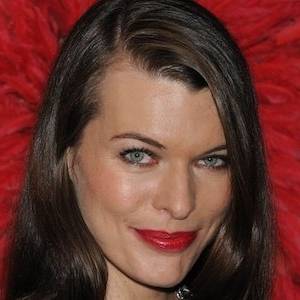