Born on May 6, 1995 (age 27) in Zagreb, Croatia. He is a celebrity soccer player. The parents of Marko Pjaca are Višnja Pjaca, Željko Pjaca. Marko Pjaca has 2 siblings in His family: Martina Pjaca, Iva Pjaca. He weight is 183 lbs. He height is 6′ 1″.

Croatian international winger who competed in the 2016 European Championship for his country. He has professional experience with Lokomotiva Zagreb and Dinamo Zagreb. In 2016, he signed a five-year deal with Juventus. In 2018, he was loaned to Schalke in Germany.

He was born to Višnja and Željko Pjaca and has two siblings.

He began his youth career with Dinamo Zagreb in 2004 before joining Lokomotiva in 2012, where he made his professional debut.

He won a Croatian League title and Croatian Cup with Dinamo Zagreb in 2014-2015.

Information about His net worth in 2021 is being updated as soon as possible by infofamouspeople.com, You can also click edit to tell us what the Net Worth of the Marko Pjaca is

He and Luka Modric have played together on Croatia's national team.

Marko Pjaca's house and car and luxury brand in 2021 is being updated as soon as possible by in4fp.com, You can also click edit to let us know about this information. 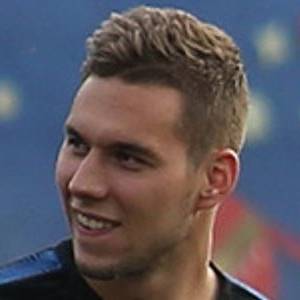