Kiefer Sutherland is a versatile actor who has played a wide range of roles. He was born into a family of actors, Shirley Douglas and the iconic Donald Sutherland, and he, too, decided to pursue a career as an actor. He began his acting career in films like 'Max Dugan Returns,' 'The Bad Boy,' 'Stand by Me,' and 'The Lost Boys,' in which he played minor roles. With supporting roles in films like "Young Guns" and "Flatliners," he began to get attention. He appeared in films such as 'Twin Peaks: Fire Walk with Me,' 'A Few Good Men,' 'The Three Musketeers,' 'Eye for an Eye,' 'A Time to Kill,' 'Dark City,' and 'Phone Booth,' with varied degrees of success. In the television series '24,' he played the role of agent Jack Bauer. Over the course of eight seasons, he received numerous awards for this performance, and he was consistently nominated for Golden Globes and Emmys. He also became one of the serial's executive producers. For the series, he received a Golden Globe and a couple of Emmys. He was also honored with a star on the Hollywood Walk of Fame.

He married Camelia Kath in 1987 and the couple had a daughter named Sarah in 1988. He is the son of actor Donald Sutherland . After his divorce from Kath, he was married to Elizabeth Kelly Winn from 1996 until their divorce in 2004.

He lived with fellow actor Robert Downey, Jr. for three years when he initially went to Hollywood.

Information about His net worth in 2021 is being updated as soon as possible by infofamouspeople.com, You can also click edit to tell us what the Net Worth of the Kiefer Sutherland is

He played the villain opposite Colin Farrell in the 2002 film Phone Booth.

Kiefer Sutherland's house and car and luxury brand in 2021 is being updated as soon as possible by in4fp.com, You can also click edit to let us know about this information. 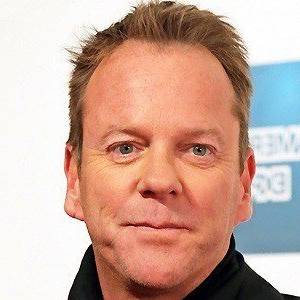