Hugh John Mungo Grant is an English actor. His awards include a Golden Globe Award, a BAFTA Award, Volpi Cup and an Honorary César. As of 2018, his films have grossed a total of nearly US$3 billion worldwide from 29 theatrical releases.He first received attention for his performances in costume dramas including the Merchant-Ivory films Maurice , for which he received the Volpi Cup, and The Remains of the Day as well as Sense and Sensibility and Restoration . Grant achieved international success after appearing in Mike Newell's romantic comedy film Four Weddings and a Funeral , whereupon he received the Golden Globe Award for Best Actor – Motion Picture Musical or Comedy and the British Academy Film Award for Best Actor. He then became widely known as a movie star, establishing himself as a as a charming, vulnerable, witty romantic lead with satirical comic talent. He starred in the romantic comedies Notting Hill , Bridget Jones's Diary , About a Boy , Two Weeks Notice , Love Actually and Music and Lyrics .Grant began to take against-type parts, starting with multiple roles in The Wachowskis' epic science fiction drama film Cloud Atlas . He received critical acclaim for his portrayals of St. Clair Bayfield in Stephen Frears' Florence Foster Jenkins alongside Meryl Streep, for which he received a British Academy Film Award and a Golden Globe Award, and Screen Actors Guild Award nominations. The next year he starred in the family comedy Paddington 2 as the antagonist, Phoenix Buchanan, for which he received a British Academy Film Award for Best Supporting Actor nomination. In 2018, he portrayed Jeremy Thorpe in the BBC miniseries A Very English Scandal, earning a Primetime Emmy Award for Best Actor in a Limited Series nomination. He also starred in the action films The Man from U.N.C.L.E. and The Gentlemen . Most recently he starred in the HBO thriller miniseries The Undoing opposite Nicole Kidman for which he received his second Primetime Emmy Award nomination.

Hugh Grant is one of the most skilled British actors and one of Hollywood's most successful performers. He was born into a humble London family and received a college scholarship before joining the Oxford University Dramatic Society, which exposed him to the world of acting. While still a student, he made his acting debut in the film "Privileged." After receiving positive feedback for his performance in the film, he decided to pursue a career in acting instead of pursuing a Ph.D. With his appearance in the film "Four Weddings and a Funeral," he rose to fame and praise, and his career in the movies took off, with a string of blockbuster pictures. Sense and Sensibility, Notting Hill, Bridget Jones's Diary, and Music and Lyrics are just a few of his well-known films. Hugh Grant has made a name for himself as an A-list Hollywood actor. His seamless comedic technique and scathing comedy timing have made him a household name.

He dated actress Elizabeth Hurley for thirteen years, and they split amicably in May 2000. He became the godfather of her son, Damien. He had a daughter named Tabitha and a son named Felix with Tinglan Hong and he also had a son and a daughter with Anna Eberstein.

Before opting to pursue acting, he explored a career as an art historian.

He was praised by critics for his performance in About a Boy.

Hugh Grant's estimated Net Worth, Salary, Income, Cars, Lifestyles & many more details have been updated below. Let's check, How Rich is He in 2021-2022? According to Forbes, Wikipedia, IMDB, and other reputable online sources, Hugh Grant has an estimated net worth of $150 Million at the age of 61 years old in year 2022. He has earned most of his wealth from his thriving career as a Actor, Film Producer, Voice Actor from England. It is possible that He makes money from other undiscovered sources

He gave a fantastic performance in the film Sense and Sensibility, which also starred Emma Thompson .

Hugh Grant's house and car and luxury brand in 2021 is being updated as soon as possible by in4fp.com, You can also click edit to let us know about this information. 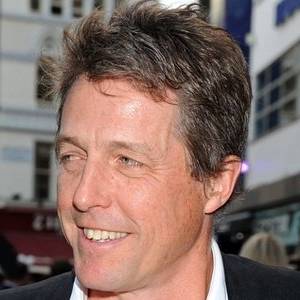