Thomas Cruise Mapother IV , better known as Tom Cruise, is an American actor and producer. One of the world's highest-paid actors, he has received various accolades, including an Honorary Palme d'Or and three Golden Globe Awards, in addition to nominations for three Academy Awards and a British Academy Film Award. His films have grossed over $4 billion in North America and over $10.1 billion worldwide, making him one of the highest-grossing box office stars of all time.Cruise began acting in the early 1980s and made his breakthrough with leading roles in the comedy film Risky Business and action film Top Gun . Critical acclaim came with his roles in the dramas The Color of Money , Rain Man , and Born on the Fourth of July . For his portrayal of Ron Kovic in the latter, he won a Golden Globe Award and received a nomination for the Academy Award for Best Actor. As a leading Hollywood star in the 1990s, he starred in several commercially successful films, including the drama A Few Good Men , the thriller The Firm , the horror film Interview with the Vampire , and the romance Jerry Maguire . For his role in the latter, he won a Golden Globe Award for Best Actor and received his second Academy Award nomination.

Tom Cruise is an award-winning American actor and filmmaker best known for movies in the ˜Mission: Impossible' film series in which he plays secret agent Ethan Hunt. He is considered to be one of the biggest movie stars in the United States and was Hollywood's highest-paid actor in 2012. Born in New York to an abusive father and brought up in near-poverty, there was nothing in his early life to suggest that one day he would become one of the most famous actors in the world. Even as a teenager Cruise dreamed of becoming a priest, not an actor. However, destiny had other plans in store for him and he found himself playing a small role in a film ˜Endless Love' as a 19 year old. He realized that acting came naturally to him and decided to seriously pursue acting as a career. Over the next few years he appeared in a lot of supporting roles before bagging his first major role in the romantic comedy ˜Risky Business'. Strikingly handsome and blessed with boyish charms, it did not take him long to take Hollywood by storm and soon he established himself as a much sought after A-list star. His popularity reached new heights when he bagged the role of secret agent Ethan Hunt in the ˜Mission: Impossible' film series.

He once jumped on a couch during an interview with Oprah, in order to profess his love for Katie Holmes. He was married to Mimi Rogers from 1987 to 1990, Nicole Kidman from 1990 to 2001 and Katie Holmes from 2006 to 2012. He has two daughters named Isabella and Suri and a son named Connor.

He grew up in an abusive household and had planned to become a priest before becoming interested in acting.

He became the most well-known member of the Church of Scientology, the religion created by Science Fiction author L. Ron Hubbard.

Tom Cruise's estimated Net Worth, Salary, Income, Cars, Lifestyles & many more details have been updated below. Let's check, How Rich is He in 2021-2022? According to Forbes, Wikipedia, IMDB, and other reputable online sources, Tom Cruise has an estimated net worth of $600 Million at the age of 60 years old in year 2022. He has earned most of his wealth from his thriving career as a Actor, Film Producer, Screenwriter, Television Director from United States. It is possible that He makes money from other undiscovered sources Reliable sources show that his annual salary is about $50 Million Per Year

He co-starred with Renee Zellweger in the 1996 comedy/drama Jerry Maguire.

Tom Cruise's house and car and luxury brand in 2021 is being updated as soon as possible by in4fp.com, You can also click edit to let us know about this information. 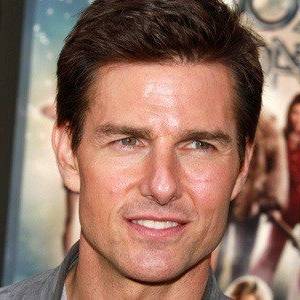