Howard Robard Hughes Jr. was an American business magnate, investor, record-setting pilot, engineer, film director, and philanthropist, known during his lifetime as one of the most influential and financially successful individuals in the world. He first became prominent as a film producer, and then as an important figure in the aviation industry. Later in life, he became known for his eccentric behavior and reclusive lifestyle—oddities that were caused in part by his worsening obsessive-compulsive disorder , chronic pain from a near-fatal plane crash, and increasing deafness.

Howard Robard Hughes Jr. was a multi-talented businessman, investor, aviator, aerospace engineer, filmmaker, and philanthropist who made his mark as a business tycoon, investor, aviator, aerospace engineer, film maker, and philanthropist. He began investing in films after inheriting his family's lucrative oil equipment company. From the late 1920s onwards, he rose to prominence in Hollywood, directing big-budget, frequently controversial pictures including The Racket, Hell's Angels, Scarface, and The Outlaw. He was one of history's most important aviators. He risked his life countless times testing planes and achieving new world air speeds in addition to designing and manufacturing planes. While he is credited with several aviation inventions, like as the first retractable landing gear, he is also famous for the Spruce Goose, one of his worst blunders. Trans World Airlines, which eventually merged with American Airlines, was owned and expanded by him. He founded the Howard Hughes Medical Institute in Miami, Florida, which he was passionate about because he lost his mother when he was a youngster. Hughes is also noted for his subsequent erratic conduct and secluded lifestyle, which was exacerbated by obsessive-compulsive disorder (OCD) and severe pain. He was one of the world's wealthiest and arguably the loneliest persons at the time of his death.

He married Ella Botts Rice in June 1925, but they divorced in 1929. He pursued many famous women throughout his life, including Ava Gardner , Olivia de Havilland , and Katharine Hepburn .

As a child, he loved creating things like a radio transmitter and a motorized bicycle.

His films were big-budget extravaganzas that challenged the social mores of his day. They included The Racket from 1928, Hell's Angels from 1930, and Scarface from 1932.

He was portrayed by Leonardo DiCaprio in The Aviator in 2004. 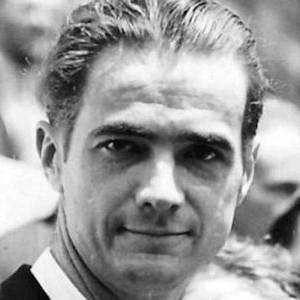