Donald Earle Messick was an American voice actor. He was best known for his performances in Hanna-Barbera cartoons.His best-remembered vocal creations include Scooby-Doo, Bamm-Bamm Rubble and Hoppy in The Flintstones, Astro in The Jetsons, Muttley in Wacky Races and Dastardly and Muttley in Their Flying Machines, Boo-Boo Bear and Ranger Smith in The Yogi Bear Show, Sebastian the Cat in Josie and the Pussycats; Gears, Ratchet, and Scavenger in The Transformers, Papa Smurf and Azrael in The Smurfs, Hamton J. Pig in Tiny Toon Adventures, and Dr. Benton Quest in Jonny Quest.

Scooby-Doo on Scooby-Doo, Where Are You! and Papa Smurf on The Smurfs are two of his most well-known characters.

He married Helen McHigh in 1949, and they had a son, Timothy Messick.

When he worked as a ventriloquist, he honed his voice acting skills.

He acted on the sitcom Duck Factory, playing a character who was also a voice actor. 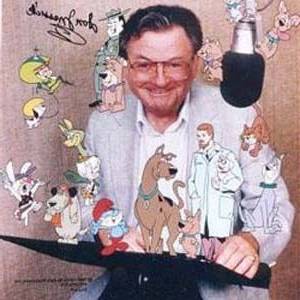