Ferdinand Romualdez Marcos Jr. , commonly referred to as Bongbong Marcos and by the initials BBM, is a Filipino politician who is the president-elect of the Philippines. He previously served as a senator from 2010 to 2016. He is the second child and only son of former president, dictator, and kleptocrat Ferdinand Marcos Sr. and former first lady and convicted criminal Imelda Romualdez Marcos.In 1980, Marcos became Vice Governor of Ilocos Norte, running unopposed with the Kilusang Bagong Lipunan party of his father, who was ruling the Philippines under martial law at the time. He then became Governor of Ilocos Norte in 1983, holding that office until his family was ousted from power by the People Power Revolution and fled into exile in Hawaii in February 1986. After the death of his father in 1989, President Corazon Aquino eventually allowed his family to return to the Philippines to face various charges. Marcos and his mother, Imelda, are currently facing arrest in the United States for defying a court order to pay US$353 million in restitution to human rights abuse victims during his father's dictatorship.Marcos was elected as Representative of Ilocos Norte's 2nd congressional district from 1992 to 1995. Marcos ran for and was elected Governor of Ilocos Norte again in 1998. After nine years, he returned to his previous position as Representative from 2007 to 2010, then became senator under the Nacionalista Party from 2010 to 2016. In 2015, Marcos ran for Vice President in the 2016 election. With a difference of 263,473 votes and 0.64 percent difference, Marcos lost to Camarines Sur representative Leni Robredo. In response, Marcos filed an electoral protest at the Presidential Electoral Tribunal. His petition was later unanimously dismissed after the pilot recount resulted in Robredo widening her lead by 15,093 additional votes.In 2021, Marcos announced that he would run for President of the Philippines in the 2022 election, under the Partido Federal ng Pilipinas , which he won by a landslide. Marcos received nearly 59% of the votes, becoming the first to be elected by a majority since the establishment of the Fifth Republic in 1986. He was officially declared President-elect by Congress on May 25, 2022. His win was also the largest since 1981, when his father won 88% of the votes due to a boycott by the opposition who protested the prior election. He is the first candidate to lose a vice presidential campaign, but win the presidency.

The son of former dictator Ferdinand Marcos, he is a Filipino politician and 2016 vice presidential contender. From 2010 until 2016, he was a senator.

He has three children, Joseph, Sandro and William, with his wife Louise Araneta.

Before joining Oxford University, he attended secondary school in England. In 1980, he was elected Vice Governor of Ilocos Norte, marking the beginning of his political career.

As a child, he appeared in the film Iginuhit ng Tadhana, which showcased the life of his father, who was then a Philippine senator.

Leni Robredo was elected as vice president in 2016.

Bongbong Marcos's house and car and luxury brand in 2021 is being updated as soon as possible by in4fp.com, You can also click edit to let us know about this information.

● Bongbong Marcos was born on September 13, 1957 (age 64) in Manila, Philippines ● He is a celebrity politician 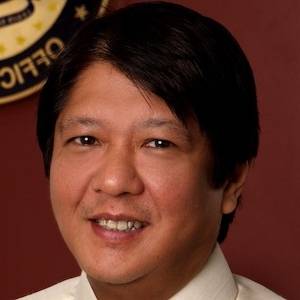