Leslie Townes "Bob" Hope was a British-American comedian, vaudevillian, actor, singer and dancer. With a career that spanned nearly 80 years, Hope appeared in more than 70 short and feature films, with 54 feature films with Hope as star, including a series of seven "Road" musical comedy movies with Bing Crosby as Hope's top-billed partner.

Perhaps no other person in the history of the entertainment industry has traveled so far tirelessly across the globe to entertain service men at war other than Bob Hope. The media named him ˜America's No. 1 Soldier in Greasepaint' and the US Congress conferred him the title of the ˜first and only honorary veteran of the U.S. armed forces'. He was most noted for his shows that entertained the American military personnel and boosted their morale at time of war. All through the World War II, his radio shows were performed and aired from military bases and combat areas. One of the most recognized talents in the world, Hope performed on Broadway, movies and went on tours with the U.S Military. He was known for his fast wit and great humor. In a career that spanned over 60 years, Hope received over two thousand honors and awards that includes 54 honorary doctorates. He appeared in more than 70 films and hosted the Academy Awards fourteen times. Apart from being the king of all media, Hope was also an ardent golfer a boxer and baseball player.

He adopted four children with Dolores Reade, whom he married in 1934. His son Tony served as a presidential appointee in the George H. W. Bush and Bill Clinton administrations.

At a young age, he began busking on the Luna Park streetcar by singing and making jokes, and won an amateur talent contest for his Charlie Chaplin impersonation in 1915.

In 1997, the U.S. Congress declared him the "first and only honorary veteran of the U.S. armed forces."

He starred with Bing Crosby in the 1952 movie Road to Bali. 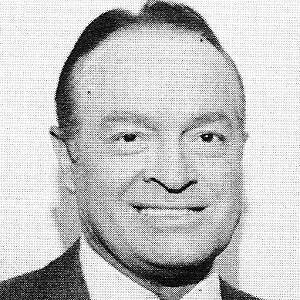