Steve Irwin's daughter is a well-known crocodile hunter. She hosted the show Jungle Girl from 2007 to 2008 and also hosted a show called Bindi's Bootcamp. She won the popular ABC show Dancing with the Stars in 2015.

Her parents are Steve and Terri Irwin . She has a younger brother named Robert . She began dating Chandler Powell in 2015.

She made an appearance on the children's television show The Wiggles.

Her first name comes from a famous crocodile and her middle name, Sue, is the same name as their family dog.

Information about Her net worth in 2021 is being updated as soon as possible by infofamouspeople.com, You can also click edit to tell us what the Net Worth of the Bindi Irwin is

She was in the movie Free Willy: Escape from Pirate's Cove alongside Beau Bridges .

Bindi Irwin's house and car and luxury brand in 2021 is being updated as soon as possible by in4fp.com, You can also click edit to let us know about this information. 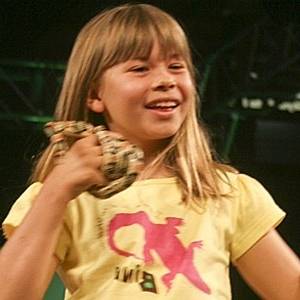