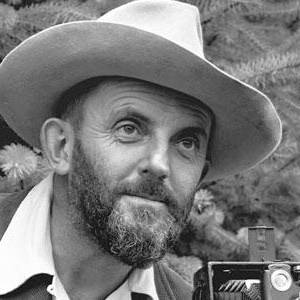 Ansel Easton Adams was an American landscape photographer and environmentalist known for his black-and-white images of the American West. He helped found Group f/64, an association of photographers advocating "pure" photography which favored sharp focus and the use of the full tonal range of a photograph. He and Fred Archer developed an exacting system of image-making called the Zone System, a method of achieving a desired final print through a deeply technical understanding of how tonal range is recorded and developed during exposure, negative development, and printing. The resulting clarity and depth of such images characterized his photography.

Ansel Adams was a renowned American photographer and environmentalist. Although his initial ambition was to become a pianist, he was equally passionate about photography and it was only in the middle of his twenties that he realized that he would make a better photographer than a musician. By that time he had become a member of the Sierra Club and had started hiking with them, developing a keen interest in its conservation. His journey as photographer was long and tough and for a long period, he had to sustain himself by accepting commercial assignments. But his genius was apparent from the beginning and his very first portfolio was highly appreciated by all. Later, he started working for the conservation of what was left of the wilderness in the American West. He not only fought to restrict use of national park areas, but also fought to create new parks and wildernesses. Protection of redwood forests, sea lions and sea otters was also close to his heart.

He married Virginia Rose Best and had two children: Michael, born August 1933, and Anne, born in 1935.

He was a witness to the destruction that wrought San Francisco after its huge 1906 earthquake.

He was was one of the founders of the magazine Aperture, which was intended as a serious journal of photography showcasing its best practitioners and newest innovations.

Like him, Amy Smart is a celebrated California-born environmentalist .

● Ansel Adams was born on February 20, 1902 (age 82) in San Francisco, California, United States ● He is a celebrity photographer ● In His career, Ansel Adams has achieved a Hasselblad Award, Presidential Medal of Freedom● He died on April 22, 1984, Bariatric Surgery Center at Community Hospital of the Monterey Peninsula, Monterey, CA