Jeffery Lamar Williams (born August 16, 1991), known professionally as Young Thug, is an American rapper, singer, and songwriter. He is considered to be an influential figure of his generation, with his music impacting the modern sound of hip hop and trap music. Known for his eccentric vocal style and fashion, Thug initially released a series of independent mixtapes beginning in 2011 with I Came from Nothing. In early 2013, he signed with Gucci Mane's 1017 Records, and later that year he released his label debut mixtape 1017 Thug to critical praise.Young Thug received mainstream recognition in 2014 with the singles "Stoner" and "Danny Glover" in addition to appearances on several singles, including T.I.'s "About the Money", Tyga's "Hookah", and Rich Gang's "Lifestyle". That year, he also signed to Lyor Cohen's 300 Entertainment and collaborated on the mixtape Rich Gang: Tha Tour Pt. 1. In 2015, he amassed a number of mixtapes, including Barter 6 and two installments of his Slime Season series. Subsequently in 2016, Thug issued commercial mixtapes I'm Up, Slime Season 3, and Jeffery. In 2017, Thug featured on the hit song "Havana" by Cuban pop singer Camila Cabello, which became his first number-one single on the Billboard Hot 100. In 2018, he released a compilation album Slime Language with his label YSL Records. In 2019, he won the Grammy Award for Song of the Year for his songwriting contribution on "This Is America".Young Thug's debut studio album, So Much Fun (2019), debuted at number one on the US Billboard 200 and included the Billboard Hot 100 top-twenty singles "The London" and "Hot". The following year, his single "Go Crazy" with Chris Brown from the collaborative mixtape Slime & B (2020) peaked at number three on the Hot 100, becoming his first top-ten single as a lead artist. Additionally, he reached number one on the Billboard Hot 100 for the second time in his career with his feature on Travis Scott's single "Franchise", In 2021, Thug released the compilation album Slime Language 2 which debuted at number one on the Billboard 200. Later that year, Thug would reach number one on the Hot 100 a third time by featuring alongside Future on Drake's "Way 2 Sexy". His second studio album, Punk, was released on October 15, 2021. It debuted at number one on the Billboard 200, becoming his third number one album, as well as his second chart topping project of 2021.

Jeffery Lamar Williams, more famously known as Young Thug, is an American rapper. He has reserved a spot for himself in the U.S. music charts since 2011. Collaborating with artists such as Gucci Mane, Birdman, Waka Flocka Flame and Richie Homie, he has become today's mainstream rapper. He released a mix tape in 2013, which received positive reviews, making his music popular at night clubs and parties. Growing up amongst ten siblings, he has worked hard to earn recognition - first at Atlanta and then in the States. He has set many trends in his early career as a style icon and carries himself with a casual and effortless demeanor. His bling accessories and long hair, is now a fashion statement for aspiring rappers. In his adolescent years he discovered that he comprehended women's fashion better, and began sporting new styles combining male and female attires, which he continues to exhibit at various events and manages to pull off. This may have generated many controversies, but not as much as his proclamation of being homosexual, even though he is engaged to Jerrika Karle. Without concealing his unconventional lifestyle, he has become a star owing to his impeccable rhythm. He is candid, blunt and non-chalant, which helps him remain unaffected by negative criticism.

His birth name is Jeffrey Williams. He had six children by four different women. In 2015, he got engaged to Jerrika Karlae; however, they would later break-up in 2017.

He was signed by Gucci Mane's label 1017 Brick Squad Records after Mane listened to his first three mixtapes I Came From Nothing Parts 1, 2, and 3.

Young Thug's estimated Net Worth, Salary, Income, Cars, Lifestyles & many more details have been updated below. Let's check, How Rich is He in 2021-2022? According to Forbes, Wikipedia, IMDB, and other reputable online sources, Young Thug has an estimated net worth of $8 Million at the age of 30 years old in year 2022. He has earned most of his wealth from his thriving career as a Rapper from United States. It is possible that He makes money from other undiscovered sources

He performed at the same Fool's Day Off show as Trick Daddy in 2013.

Young Thug's house and car and luxury brand in 2021 is being updated as soon as possible by in4fp.com, You can also click edit to let us know about this information. 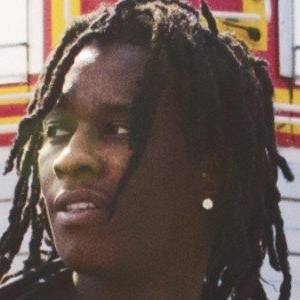