Wayne Mark Rooney is an English professional football manager and former player. He is the manager of EFL League One club Derby County, for whom he previously served as interim player-manager. He spent much of his playing career as a forward while also being used in various midfield roles. Widely considered one of the best players of his generation, Rooney is the record goalscorer for both the England national team and Manchester United as well as holding the record for the most appearances of any outfield player for the England national team.Rooney joined the Everton youth team at the age of nine and made his professional debut for the club in 2002 at the age of 16. He spent two seasons at the Merseyside club, before moving to Manchester United for £25.6 million in the 2004 summer transfer window where he won 16 trophies and became the only English player, alongside teammate Michael Carrick, to win the Premier League, FA Cup, UEFA Champions League, League Cup, UEFA Europa League, and FIFA Club World Cup. He scored 253 goals for United in all competitions to make him their top goalscorer of all time, with 183 Premier League goals being the second most scored by a player for any single club, behind Sergio Agüero . Rooney's 208 Premier League goals make him the Premier League's second-top scorer of all time. He also has the third-highest number of assists in the Premier League, with 103.Rooney made his senior international debut for England in February 2003, aged 17, and is England's youngest ever goalscorer. He played at UEFA Euro 2004 and scored four goals, briefly becoming the youngest goalscorer in the history of the European Championship. Rooney later featured at the 2006, 2010 and 2014 World Cups, and was widely regarded as his country's best player. He has won the England Player of the Year award four times, in 2008, 2009, 2014, and 2015. With 53 goals in 120 international caps, Rooney is England's second-most-capped player and all-time record goalscorer.

Star forward who became one of Manchester United's all-time top scorers and led the club to 5 Premier League titles between 2007 and 2013. In 2017, he left Manchester United to return to Everton FC.

He played for the youth team of Everton when he was nine; he later made his senior debut with them from 2002 until 2004.

He became the youngest player to represent England when he made his senior international debut in 2003. He was named PFA Players' Player of the Year and the FWA Footballer of the Year in 2010.

Wayne Rooney's estimated Net Worth, Salary, Income, Cars, Lifestyles & many more details have been updated below. Let's check, How Rich is He in 2021-2022? According to Forbes, Wikipedia, IMDB, and other reputable online sources, Wayne Rooney has an estimated net worth of $170 Million at the age of 36 years old in year 2022. He has earned most of his wealth from his thriving career as a Football player, Soccer Player from England. It is possible that He makes money from other undiscovered sources Reliable sources show that his annual salary is about $26 Million

Half a decade into his career with Manchester United, he became the third highest-paid soccer player in the world behind Lionel Messi and Cristiano Ronaldo.

Wayne Rooney's house and car and luxury brand in 2021 is being updated as soon as possible by in4fp.com, You can also click edit to let us know about this information. 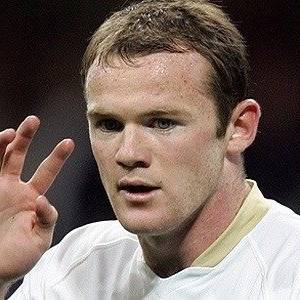