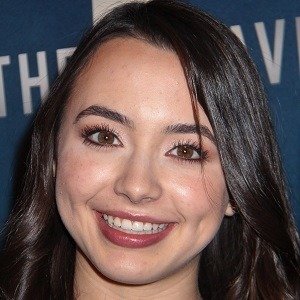 Awards: Shorty Award for YouNower of the Year

Some fact of Veronica Merrell

Scroll below and check our most recent updates about Veronica Merrell Biography, Before Fame, Trivia, Family life, Net Worth, Salary, Age, Profession and Zodiac. You can also discover more information about Current Net Worth as well as Monthly / Year Salary, Expense, Income Reports!
You can click and edit on each item to provide us with useful information about Veronica Merrell

Veronica Merrell was born on August 6, 1996 (age 23 years) in Kansas City, Missouri, United States. She is a celebrated youtube star. Her popular songs are What I Want for Christmas, It's Valentine's Day Song and Runner Runner2017. You can find Her website below: https://www.merrelltwins.com/. She was nominated for Teen Choice Award for Choice YouTuber, Teen Choice Award for Choice Web Star - Female. In Her career, Veronica Merrell has achieved a Shorty Award for YouNower of the Year.
Veronica from the ˜MerrellTwins' channel on YouTube, is a beautiful actress, musician, comedian and model. She began her channel along with her twin sisterand has earned 1.9 million subscribers on their channel. Her aim is to create high quality videos. She is also popularly known as a television actress, and creates her own short films too. She has a beautiful voice and uses her YouTube channel to showcase her multiple talents. Veronica is also a Vine star and has a fan base of 38 K followers owing to her hilarious six-second comic situations. She has 612K followers on Instagram and keeps her supporters updated by regularly tweeting about her new ventures on Twitter, where she has 126K fans. She is known to be one of the best YouNowers too! She starred as an actress in television shows ˜Fake It' and ˜Jane the Virgin.' She played Mia in the movie ˜The Standoff.'

She was named a Top 10 Actor for Improvisation at the 2009 Actors, Models and Talent Competition. She became friends with Dominic DeAngelis through her school.

As our current database, Veronica Merrell is still alive (according to Wikipedia, Last update: January 6, 2020).

Born in Kansas City, Missouri to Wendy and Paul Merrell, she and Vanessa moved to Los Angeles, California in 2013.

Fellow YouTuber Gabriel Conte has appeared on the twins' channel.

What To Do When You Have NOTHING to Do - Merrell Twins