Anthony Jay Robbins is an American author, coach, speaker, and philanthropist. He is known for his infomercials, seminars, and self-help books including the books Unlimited Power and Awaken the Giant Within.

Anthony J. Mahavoric, famously known as Tony Robbins, is an American life-coach, self-help guru, motivational speaker and author. The most famous works of his career are his books, ˜Unlimited Power' and ˜Awaken the Giant Within' and his innovatively designed seminars, ˜Unleash the Power Within' and ˜Mastery University'. He writes and talks on subjects like health and energy, breaking conventional fears, accumulating more wealth, optimum utilization of the available resources, maintaining and enhancing relationships and communication. He was inspired to enter the realm of motivational speaking when he worked under John Rohn who taught him that happiness and success are perception and hard work based. He has attained a celebrity status for himself through his much-publicized ˜firewalk' seminars and by featuring in magazines like: Time, Newsweek, Fortune, Forbes, Life, GQ, Vanity Fair, Businessweek, etc. He also co-hosted ˜Oprah's Lifeclass' with Oprah Winfrey on the OWN Network. He is a successful entrepreneur, as he serves as the Chairman of seven privately held industries as diverse as hospitality, education, media production, business services, and neutraceuticals, spread worldwide. He is the founder of the' Robbins-Madanes Center for Strategic Intervention', which produces training materials and programs for the therapeutic community.

He married his first wife, Becky Robbins, after having a child with his former girlfriend, Liz Acosta. His second marriage was to Bonnie Humphrey.

He attended Southern California's Glendora High School. In his twenties, he lived in a small, low-rent apartment in Los Angeles and dreamed of owning a mansion. He accomplished this goal in 1984 when he bought the Del Mar Castle.

He began his career as a motivational speaker by promoting seminars for Jim Rohn.

His book Money: Master the Game features interviews with such financial experts as Charles Schwab, Warren Buffett, and Carl Icahn.

Tony Robbins's house and car and luxury brand in 2021 is being updated as soon as possible by in4fp.com, You can also click edit to let us know about this information.

Top 7 Motivational Speakers of the year 2021 by vote 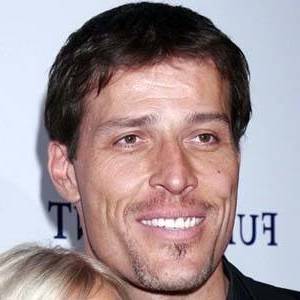